Slovakia took the 3 points from its second match at the 2012 Olympic Games - European Qualification for men in Sofia to stay in contention for a place in this Saturday’s semifinals. The team mentored by Stefan Chrtiansky defeated Finland by 3:1 (25-20, 25-16, 21-25, 25-19) to send their opponents back home with a third loss. 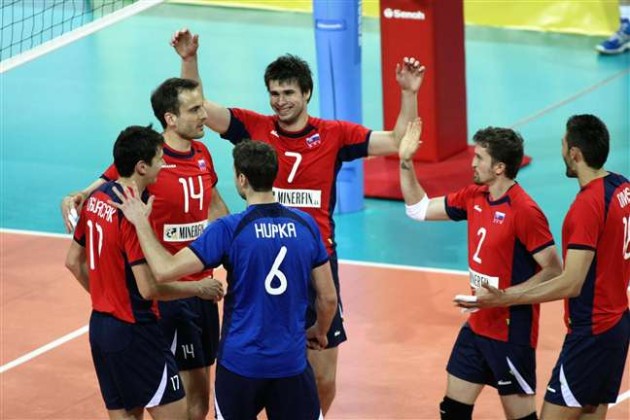 Slovakia completely controlled the situation on the court in the first two sets.  Captain and setter Michal Masny set an example with his excellent performance in the first set while rising star Peter Michalovic’s powerful spikes gave Finland a lot of hard time.  After a final score of 25-20 in the first part, the Slovaks were able to extend their domination into the second with remarkable contribution of their block (7 points).  With Michalovic continuing to be the greatest menace for the Finns Slovakia closed the set at an impressive 25-16.

Slovakia was up in the score through the first technical time-out of the third set, but then it was time for Finland to strike back.  Inspired by their enthusiastic fans on the stands, the Finns stepped up their efforts in serving and attacking and were able to take charge of the rest of the set. With Matti Hietanen in the role of Finland’s top gun in this set, the team of Daniel Castellani managed to win the set by 25-21.

Under the threat of losing a precious point, Slovakia came back full force into the fourth set.  Stefan Chrtiansky’s players kept their concentration, took the lead at the very beginning and never let it go.  Once again Masny was in complete control of the situation with Frantisek Ogurcak as his main weapon in offense.  The Slovaks gradually piled up a substantial advantage to close the set at 25-19 and stay in contention for a semifinal spot.

Peter Michalovic topped the scorers’ chart of the match with a total of 20 points as Frantisek Ogurcak and Lukas Divis added 17 and 16, respectively, onto Slovakia’s tally.  Matti Hietanen was Finland’s best scorer with 13 points.