After almost two months the 2014 edition of the CEV Volleyball European League is about to come to a close. On Saturday night, starting at 8 pm local time, the national teams of Montenegro and Greece will be playing the second act of the final in what is by far the most anticipated match in history for the home heroes. 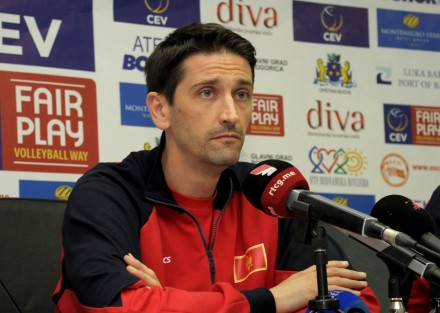 After scoring a 3:2 away victory on Wednesday in Thessaloniki, the hosts of this match are only one step away from seizing the title of the European League. They now need to win that second match, with any score, to record the greatest success for their country since Montenegro’s independence back in 2006.

“I can only say that I am extremely satisfied with our performance so far in this competition,” said head coach Slobodan Boškan, a former Olympic and European champion with the then Yugoslavia, while addressing the media on Friday.

“I want to emphasize that we have reached the final stage of the European League thanks to an excellent team spirit and the good atmosphere that reigns in the group. Each player has given his contribution to this result and I would not single out any individuals. I think we deserve to win Saturday’s match as I have seen my players have been very focused and determined in their training as well as in all of their previous matches.”

Montenegro is only making their second appearance in the European League after debuting last year whereas Greece have also improved on their best result so far, a bronze medal from the 2006 edition.

“The matches we have played so far were all different from what we can expect on Saturday night,” stressed setter Simo Dabović.

“If you look at our campaign since the start of the competition, I believe that we have showed that we have the quality that is required to make the final and win gold there. However, we shall forget what we have achieved up to now and focus solely on this match, giving our best to finalise our quest for gold.”

Boškan and Dabović invited as many fans as possible to find their way to Mediteranski Sportski Centar for the very last step in Montenegro’s campaign to win the 2014 edition of the CEV Volleyball European League. The match, starting at 8 pm local time, will be streamed live and for free on LAOLA1.tv

To read more about this competition, to see stats, video and photos click on European League 2014 M.