Radostin Stoychev, Bulgaria's volleyball team coach, was dismissed on Sunday, a day after the heavy favorites for the 2012 Olympic Games-European Qualification Tournament were defeated by Germany in the second semifinal. 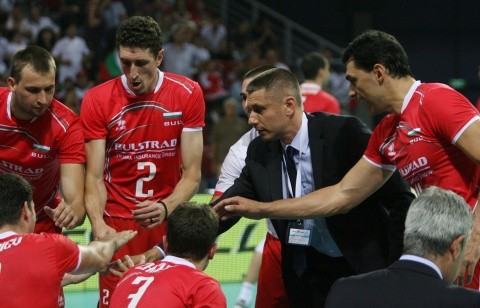 “Our opponents deserved the victory,” Bulgaria coach Radostin Stoychev conceded. “They showed high-class volleyball tonight. But in my opinion, until the end of the third set, both teams had equal chances to win the game. The lack of experience in our team was the key to our loss. We failed in one rotation in the third set. In the next part of the game, there was only one team on court and it was Germany.”

Stoychev replaced former coach Silvano Prandi at the beginning of February last year after the unconvincing performance of the national team at the 2010 World Volleyball Championship.

He signed a contract to coach the Bulgarian team until the end of the Summer Olympics in London in 2012.

Stoychev received less money than his predecessor because he agreed to give his assistant Kamilo Plachi a bigger salary, according to media reports.

KOR M: With Simon and Song nearby,...