In their opening match for Olympic qualification tournament South Korea played against Cuba. 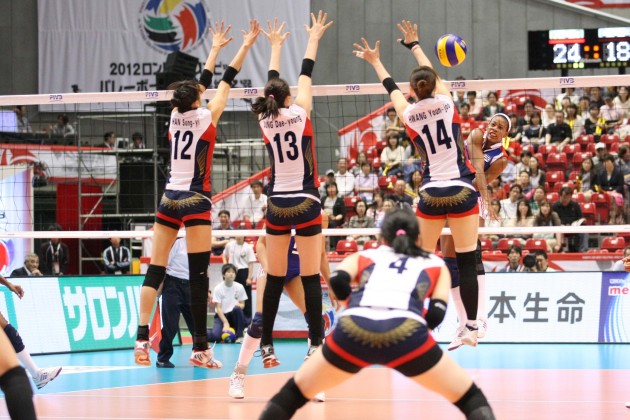 Superstar Kim Yeon-Koung and Hwang Youn-Joo powered the Koreans in the victory with 16 points each. Yanelis Santos led Cuba with 10 points while Rosanna Giel added eight in the loss.

Korea used strong defense and good combination play to seal the win. On the other hand, Cuba was done in by a high number of unforced errors in the match. Both teams scored six blocks and Cuba had a 9-5  advantage in aces but made 22 errors compared to 15 by the winners.

Santos unleased a pair of powerful serves to give Cuba a 3-1 lead early in the first set but Korea rallied to take the lead. Cube once again regained control but Korea eventually took the lead again, going in 16-12 up at the second TTO. Cuba tried to fight back, remaining within five points of their Asian rivals, but it was Korea who took first blook, winning the opening set.

Two service aces by Santos put Cuba ahead 3-1 in the second set and stayed ahead until errors began to creep in, allowing Korea to come back into the match. Once again the scores stayed close, with Cuba fighting back from 18-14 down to draw level. The two teams traded blows up to 23-all when Korea dug deep to wrap up the set.

It was Korea who took early control in the third going ahead 8-5. Korea maintained the three-point advantage before Cuba sent a spike long, sending them further behind at 16-9 at the second TTO. A beautiful save by libero Kim Hae-Ran led to another Kim Yeon-Koung spike and a 17-11 margin for Korea. Kim Yeon-Koung spiked again for 20-13 and then once more 23-16 as Korea moved in for the kill. A service ace by Cuba made it 23-19 following a timeout. Korea missed its first match point when Kim Yeon-Koung served long, but finished it on a spike by Hwang.