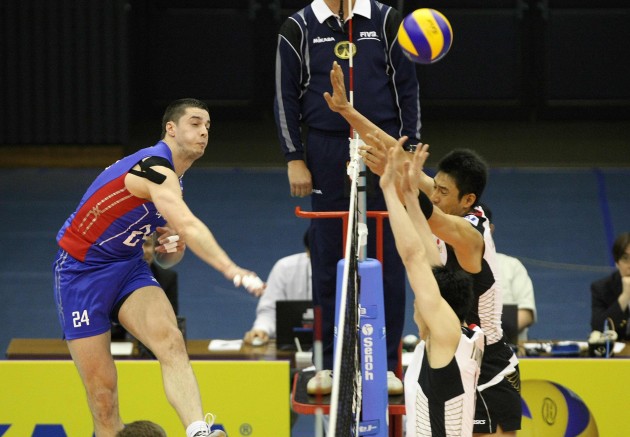 Leading Russia was the hard-hitting Pavel Moroz matching his uniform number with 24 points, and four of his team’s 18 blocks. For much of the day, he battled Japan’s Yusuke Ishijima, who led the home side in a losing effort with 17 points.

Japan, despite serving errors early, stayed close as Russia were uncharacteristically off form. Yury Berezhko, who led Russia in scoring on Friday was just off today, mis-firing three straight points from the wing. Fukuzawa, in contrast, was attacking well for Japan and his spike put Japan up 11-8. Aces from Ishijima and Yamamoto helped them extend to 23-18, and they closed out a sleepy looking Russia side 25-20.

In the second set Japan’s diminutive setter Shigeru Kondoh posted his second stuff block on Evgeny Sivozhelez to help his side edge ahead 9-6. But Russia’s Moroz woke his side up with great attacking, complemented with blocking from Dmitry Shcherbinin who put a stuff on Japan’s Yamamoto to draw even at 15-15, his fourth block of the match. The teams were even until late on when a hard cross-court Moroz drive took the frame for Russia 25-23, and evened the match at a set apiece.

Moroz’s scoring spree continued into the third set, with an ace and a spike back-to-back putting his side up 11-8. More strong blocking from the Russians let them edge ahead, with a stuff by the giant Dmitriy Muserskiy sucked the energy from the home crowd, as Russia took seven of eight points capped by Shcherbinin’s fifth block to make it 22-15. He would close with a put-away at the net, taking the third 25-16, going up two sets to one.

The powerful Ishijima came out firing in the fourth, with three hard spikes and a stunning block on Moroz putting Japan up 9-5. His side kept that edge until late, with Fukuzawa chiming in with a pair of hard spikes, helping cruise to a 22-16 lead. A Yamamura spike eventually took the set 25-19, tying the match at two sets all.

Both teams looked jittery in the tie-break, with a flurry of serving errors to start. But Berezhko who had been quiet all day, finally began to find his stride, with three spikes putting his team up three. Russia’s blocking was outstanding, with a Moroz stuff on Yamamoto putting them up 9-4. Japan fought hard to fight off four subsequent match points, but the lead was too great as Berezhko put it away with a spike, 15-12, three sets to two.

PHOTO OF THE DAY: Marouf pilot!