GB men’s Volleyball head coach Harry Brokking, who has been leading the team since he was appointed in May 2007, tonight announced to his 16 players in his UK Sport and National Lottery backed World class program, the two players who have been freed to leave the team based at the EIS Sheffield, which is the home of GB Volleyball. 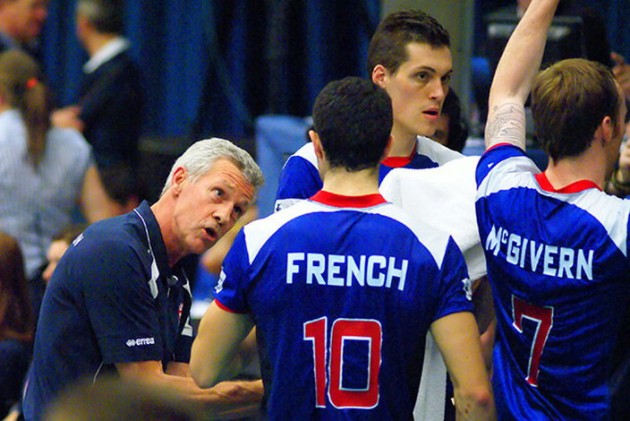 The team is preparing within a very tight and focused program to be a side to be reckoned with at this summer’s London Olympic Games.

After last weekend’s win in Albania for the first round of the 2013 CEV Volleyball European Championship, the GB men have redoubled their efforts in a bid to impress the head coach and his coaching staff, Joel Banks and Simon Loftus, to avoid being invited to the BVF boardroom for the end of training session meeting, a meeting that no one wanted to be in.

Coach Brokking had called four of his players into the boardroom and congratulated each and every one of them on their efforts to date. Their significant progress had been noted, and it was recognized that each one of them had given everything they could in the tough full-time training environment. What followed was a full breakdown of each individual’s undoubted qualities, as Brokking singled out each and every aspect of what he had seen in each player since the whole squad had reassembled in April. All players were challenged to continue improving specific aspects of their skill level and to make his job as a head coach the most difficult possible.

Danny Weemes (31) from Bournemouth, currently playing his professional Volleyball with Hylte in Sweden, had been part of the original squad when the group was formed with the support of World Class Performance funding back in 2006. Danny, undoubtedly one of the best talents to come out of the UK, had missed out on selection for the last two years and had forced his way back into the reckoning with good progress with his club. Brokking complimented Danny on his application, his conditioning and his new professional attitude and said he has no doubt that “Danny if he continued with his progress  would be in great shape to force his way back into the GB team for future campaigns.”
Danny thanked coach Brokking for “the opportunity to try and force his way back into his team, and said that “he would work to stay ready to challenge for a place in the future”.

In yet another very tough choice, young Ollie Kimber (21) has also been released from the current training group. Ollie has had a very solid season for Holland’s Championship winning team Langhenkel Volley, under the guidance of GB assistant coach Joel Banks. Brokking also spent time praising the efforts of his “very exciting young prospect” and urged him “to continue his progress and challenge for a place back in the group for the European Championship 2nd round tournaments in September, with a view to becoming a challenger for a position in the GB Rio training group”.

The Brokking challenge was also thrown down to each of the 14 players remaining in the squad to ”honor everybody who has been a part of the journey by striving to be the very best they can be” and fight for not only their place in the final 12 , but to fight for a starting position in the first six.
The GB men now head to the K2 Crawley for a showdown with Albania to ensure they reach those second round tournaments in September with the victors of Saturday’s tie going forward to clash with Portugal, Turkey and Belarus.