FIVB W: Russia move to 3-0 with win over Cuba

Russia dispatched Cuba in straight sets (25-19, 25-18, 25-20) on the third day of action to remain unbeaten in the FIVB Women's World Olympic Qualifying Tournament at Tokyo Metropolitan Gym on Tuesday. 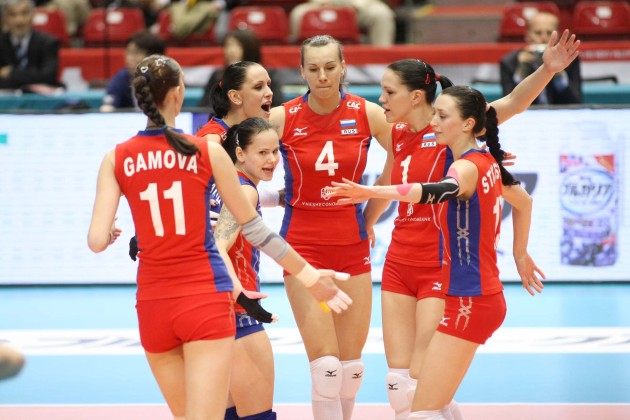 Russia (3-0) displayed a strong all-around game, with the spiking and blocking being especially impressive. The reigning world champions held an 8-5 advantage in the blocking department.

Cuba (1-2) committed a large number of unforced errors (21 compared to 9 by Russia) and could not cope with the Russia attack led by Ekaterina Gamova and Nataliya Goncharova who finished with 20 and 13 points respectively. Evgenia Estes chipped in 10 tallies.

Rosanna Giel and Yoana Palacios each scored 11 points for Cuba while Wilma Salas and Yanelis Santos had 9 apiece.

Russia came out fired out from the start and was really only challenged in the final set. A spike by Goncharova gave Russia a 5-3 lead in the first set. A quick dink by Evgeniya Startseva made it 7-3 for Russia and Cuba called a timeout. Russia was up 8-4 at the first TTO following a spike by Maria Borisenko. Goncharova‘s spike made it 11-5 for Russia. Yoana Palacios sailed a spike long as Russia made it 13-6. Rosanna’s Giel spike off an option play took the count to 14-9. After Cuba scored again, Russia took a timeout. A service error by Palacios saw Russia take a 16-11 lead into the first TTO. Gamova made it 17-12 with  a spike, before Wilma Salas replied with one of her own. Another Salas spike pulled Cuba within three at 18-15. Goncharova moved it to 20-16 with a spike. Gamova‘s block put Russia within three points of the set at 22-16. A Gamova spike gave Russia set point at 24-19 and claimed the 25-19 on a spike by Borisenko.

A service error by Palacios gave Russia a 5-3 lead in the second set. Cuba showed more spark out the outset of the set and came within 7-6 before a service error gave Russian an 8-7 lead at the first TTO. A Goncharova spike made it 10-7. With Russia ahead 12-8, Cuba called a timeout. Gamova soared for a spike to make it 15-8 and Goncharova followed as Russia went up 16-8 at the second TTO. Russia was in control with a 20-12 lead when Cuba called a timeout to try and slow them down. Goncharova spike made it 22-15 as Russia moved for the set. A spike by Santos made it 23-17. Gamova‘s spike down the middle put Russia up 24-17 and they finished the set 25-18 on a service error by Salas.

Cuba gained a 6-5 lead in the third set on a spike by Lidia Cleger. Russia tied it 7-7 on a powerful Gamova spike and led 8-7 at the first TTO. Cuba moved back ahead 10-9 on a spike and Russia called time. Cuba fought to hang in the match, taking the lead again 14-13 with a spike. A block by Leanny Castaneda put Cuba up 16-14 at the second TTO. Gamova‘s block tied the score 16-16. Russia went back ahead 18-17 on a spike by Evgenia Estes and Cuba took a timeout. A reception error by Cuba made it 22-18 and Russia could smell the victory. Gamova‘s spike gave Russia match point at 24-20 and they closed it out 25-20 when Salas sailed a spike long.