FIVB W: Thailand improve record at 3-2 with victory over Peru

Thailand downed Peru in straight sets (25-19, 25-19, 25-20) on the fifth day of action in the FIVB Women's World Olympic Qualifying Tournament at Tokyo Metropolitan Gym on Friday. 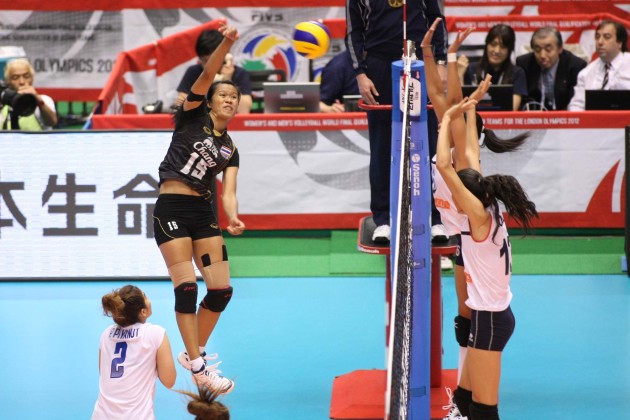 The victory improved Thailand to 3-2, whihle Peru fell to 1-4 with the loss.

Thailand was strong on both serve and reception in the win, while Peru strugged on defense.The winners held an 8-5 advantage in blocks and 4-2 in aces.

A dink by Yllescas staked Peru to a 5-1 lead in the opening set. Thinkaow Pleumjit‘s spike made it 6-4. After Thailand rallied to tie the score 6-6 Peru called a timeout. Apinyapong Wilavan‘s spike put Thailand in front 8-6 at the first TTO. Elena Keldibekova sailed a serve long and Thailand moved ahead 10-8. A spike by Yllescas leveled the score at 12-12. Apinyapong’s service ace made it 14-12. Soto‘s return flew long and Thailand was up 16-12 at the second TTO. Mirtha Uribe sent a spike long to put Thailand in front 20-14 and Peru took a timeout. Thinkaow made a nice spike off an option play to make it 22-15 as Thailand closed in on the set. Kanthong‘s spike put Thailand within a point of the set at 24-17 and they closed it out 25-19 on a block by Apinyapong.

A block by Hyapha Amporn saw the Thais race to a 6-1 lead in the second set. Ruiz sent a spike into the net and Thailand led 8-1 at the second TTO. Yllescas spiked after an extended rally to make it 9-2. Thinkaow‘s spike put Thailand in front 11-5. Hyapha’s spike gave Thailand a seven-point lead at 15-8 and Kanthong‘s dink put them up 16-10 at the second TTO. Peru closed to within 16-13 on a block by Yllescas. A Rueda spike made it 18-15. Soto‘s spike moved the count to 22-18 for Thailand. A misplayed block by Peru made it 24-19 and Thailand claimed the set on a spike by Tomkom Nootsara.

Rueda fired a serve long and Thailand took a 5-3 lead in the third set. Yllescas sent another spike over and Thailand went up 10-6. Soto‘s spike made it 14-8. Thinkaow gave Thailand a 16-10 margin with a spike at the second TTO. A service ace by Alexandra Munoz took it to 20-15. Thailand called a timeout after Peru closed within 20-16. Munoz recorded another service ace for 20-17. Thailand stopped Peru’s run at 21-18 on a spike by Apinyapong. Soto‘s spike made it a one-point game at 21-20. A net infraction put the Thais up 23-20 and Kanthong took it to match point at 24-20 with a spike. Thailand captured the match 25-20 when Ortiz sent a spike wide.