World champions Russia took a major step towards the London Olympic Games with a four-set (25-18, 25-11, 14-25, 25-22) victory over Serbia on the fifth day of action in the FIVB Women's World Olympic Qualifying Tournament at Tokyo Metropolitan Gym on Friday. 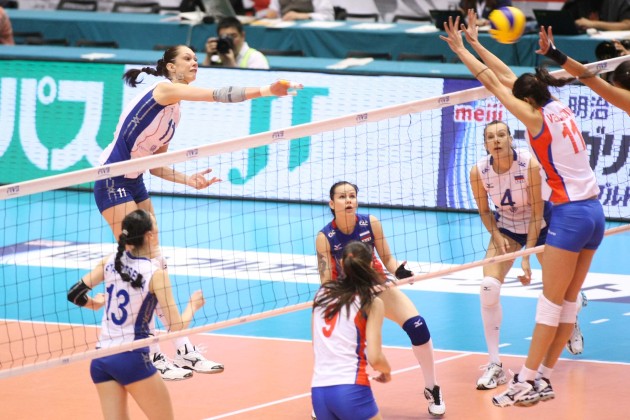 Russia was on top of their game from the start and excelled in all facets to remain unbeaten at 5-0 with the triumph, while Serbia dropped to 3-2.

Russia‘s two remaining matches are against hosts Japan on Saturday and the winless Chinese Taipei on Sunday.

Evgenia Estes and Ekaterina Gamova both tallied 18 points for Russia in the win while Nataliya Goncharova added 13. Stefana Veljkovic had 15 points for Serbia, while Jovana Vesovic contributed 13.

Russia dominated the game at the net with a 15-7 difference in blocks. Serbia had almost twice as many errors (21-11) than Russia in the defeat.

Vesovic‘s spike put Serbia up 5-4 in the first set. Russia took the lead 6-5 on a spike by Estes. Vesovic sent a spike wide and Russia was up 8-6 at the first TTO. A quick dink by Evgeniya Startseva made it 9-7 for Russia. A nice dink by Estes madeit 13-10 for Russia and Serbia called a timeout. Russia led 16-10 at the second TTO. Veljkovic‘s spike made it 19-13 for Russia. A nice block by Startseva made it 21-14 as Russia eyed taking the set. Goncharova‘s block put Russia within two points of the set at 23-16. Goncharova spike to make it set point at 24-17 and she gave Russia the set with another at 25-18.

A service error by Vesovic made it 6-0 for Russia in the second set. Serbia sent a spike long and Russia was on top 8-3 at the first TTO. A Gamova spike made it 10-3. Bojana Zivkovic‘s service ace took it to 13-7 for Russia. Another Russia spike made it 16-7 at the second TTO. Luliia Merkulova‘s spike gave Russia 20-9 advantage. Tijana Malesevic served into the net and Russia was two points from the set at 23-11. A fine block by Borisenko made it set point at 24-11 and Russia finished it 25-11 on another Borisenko block.

A service ace by Milena Rasic spotted Serbia to a 4-0 lead in the third set. Brakocevic‘s spike put Serbia in front at 7-2 and they led 8-2 at the first TTO. A dink by Malesevic made it 15-7 for Serbia and Russia called a timeout. Serbia led 16-9 at the second TTO. Veljkovic‘s spike made it 19-10 as Serbia surged toward taking the set. Vesovic made a nice dink with her left hand to put Serbia up 22-12. A spike by Vesovic gave Serbia set point at 24-12 and they took the set 25-14 when she drilled another.

Serbia took a 5-4 lead in the third set after a spike by Rasic. A well-placed spike by Estes gave Russia an 8-7 edge at the first TTO. An Estes block kept Russia ahead 13-12. Serbia equalied 14-14 on a quick dink by Maja Ognjenovic. Gamova‘s spike put Russia up 16-15 at the second TTO. A net infraction put Russia back in front at 19-18 and Estes followed with a smash. A nice block by Vesovic made it 20-20. Gamova hammered a spike for 22-20 and Serbia called a timeout.  reception error by Brakocevic made it 23-20 and she then hit a spike long to give Russia match point at 24-20. Russia closed it out 25-22 on a block by Estes.

FIVB W: Thailand improve record at 3-2 with victory over Peru