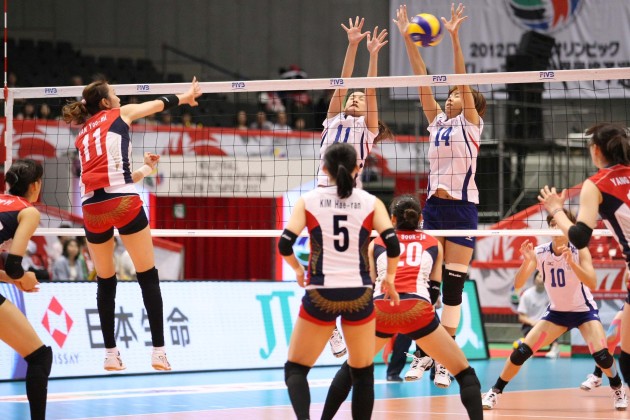 Korea improved to 3-2 with the victory, while Chinese Taipei remained winless at 0-5.

Chinese Taipei had trouble with reception and found it difficult to penetrate the Korean defense throughout the match. So dominating was Korea that there were very few rallies of any note.

Yang Hyo-Jin sparked Korea with a match-high 16 points including five blocks and four aces, while Han Song-Yi and  Kim Yeon-Koung added 11 and 10 respectively. Wen I Tzu and Tsai Yin Feng had eight points each for Chinese Taipei.

Kim Yeon-Koung, who scored 34 and 30 points, respectively, in Korea‘s previous two matches, left much of the work to her teammates in this contest.

A dink by Kim Yeon-Koung gave Korea a 5-2 lead in the first set. Kim Yeon-Koung’s block took it to 7-2 and Korea led 8-2 at the first TTO. Han Song-Yi’s block saw the Korean lead balloon to 13-3 and Chinese Taipei took a timeout. With the big lead, Kim Yeon-Koung was substituted for the first time. Yang Hyo-Jin’s spike made it 15-4 for Korea. Jung Dae-Young‘s block put Korea on top 18-6. A powerful spike by Hwang Youn-Joo gave Korea a 21-7 margin. It was set point for Korea at 24-8 after a block by Hwang and Han Yoo-Mi closed out the set 25-8 with a spike.

Korea took a 6-3 lead in the third set on a spike by Yang. Han Song-Yi‘s spike gave Korea an 8-3 margin at the first TTO. Hwang’s spike took the Korean lead to 11-4. Han Song-Yi drove home another spike for 15-7. Korea was on top 16-7 at the second TTO. Han Yoo-Mi‘s spike saw Korea extend their lead to 20-10 as they edged toward taking the match. With Kim Yeon-Koung on the bench, Chinese Taipei scored five of the next six points and Korea took a timeout. Chen Wang Ting‘s serve into the net ended the run at 22-18. A block by Han Song-Yi gave Korea match point at 24-18 and the finished it 25-18 on a block by Yang.