Switzerland women’s national team will debut next weekend in the 2012 CEV Volleyball European League in Varna, Bulgaria, and head coach Svetlana Ilic just determined the players retained for the roster that she will line-up for this much awaited international campaign, whereby the Swiss ladies will test out the likes of a few strong sides, including 2011 European bronze medalist Turkey. 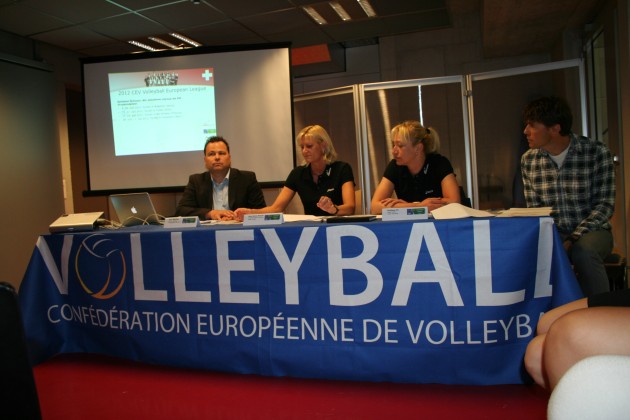 The participation in this year’s European League represents a very important step forward for the Swiss Volleyball community, especially as the final round of the 2013 European Championship to be co-hosted with Germany is approaching pretty quickly. “The development of indoor Volleyball remains one of the highest priorities for the next few years” said Werner Augsburger, the General Director of Swiss Volley. “And the European League represents a very important opportunity for Swiss Volley to showcase its organizational skills as well as the quality of our players”.

Head coach Svetlana Ilic has worked out a roster which stands out as a mix of experience and youth. Recently 18-year old middle blocker Martina Halter was also added to the group while the absence of two diagonal players who are nursing injuries have resulted into some changes in the starting positions, with Switzerland very much likely to line up three outside hitters for the matches coming up in Varna next week.

“Three players, namely Laura Sirucek, Laura Unternährer and Elena Steinemann were somehow obliged to join our training sessions by testing out their skills in three different positions and they all have confirmed that they are ready to cope with such a demanding task” said Ilic while attending a press conference at “Saint-Léonard” sports hall in Fribourg. “This move opens the way for some more options and is likely to strengthen our defense line” she added. “We shall be able to perform well in reception thereby enjoying the opportunity to attack with the necessary consistency; all this, combined with a good service, shall turn Switzerland into an opponent to reckon with for all of our next rivals” she stressed out. “I am very pleased with the way the team has been developing in the past few weeks and quite confident for the challenges ahead”. Turkey – that recently qualified for the 2012 Olympics in London – will be quite evidently the main favorite of that preliminary Pool where Switzerland will have to confront itself also with the likes of Bulgaria and France.

The home match of Switzerland against Turkey scheduled for Saturday, June 23, will be broadcast live by Star TV. “I am grateful to the CEO of Star TV, Paul Grau, as we were able to negotiate the live transmission of this match thereby securing a very important and attractive slot so that finally Volleyball is being conveyed to a very large audience across our country” stated local Organizing Director Reto Hähnlein.

If Turkey seems literally out of reach, France and Bulgaria are strong teams but whom Switzerland may reasonably challenge going for a positive result. Bulgaria’s stars are Dobriana Rabadzhieva and Strashimira Filipova. “We want to use the first couple of rounds in Bulgaria and Turkey to get rid of our nervousness and learn to cope with the pressure stemming from international matches. This shall be our mission for the opening rounds of the European League while in Fribourg we shall be able to pressure our opponents, thereby showing the positive development that this group has experienced and undergone. We need to take this first participation in the European League as a unique opportunity to get valuable experience on the international scene” singled out Ilic.

Some 200 volunteers have been involved for the home round in Fribourg to make this debut in the European League a real success.