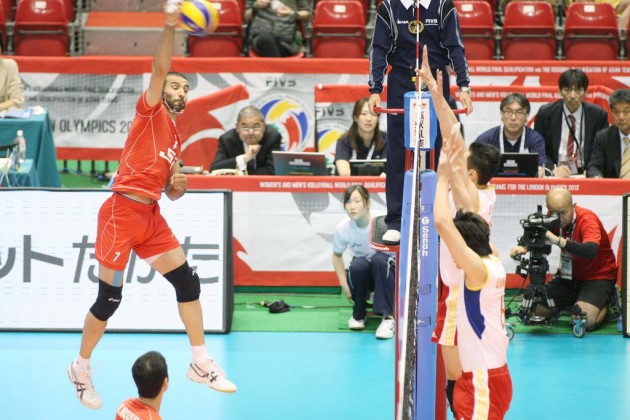 Hamzeh Zarini led Iran with 27 points, while China’s top scorer was Bian Hongmin with 16. China outblocked Iran 14–4, but Iran outserved their opponents 12-3.
Iran started off the match very focused, with Hamzeh Zarini pulverizing the ball in the opening stages as the Asian champions opened a three-point lead at the first technical timeout. But Iran were also making errors and China were able to close from 9-13 to 13-13, with Liang Chunlong doing some good defensive work at the net. From there, it was close all the way and there wasn’t more than a point in it from 16-15 (Iran) to 22-22. Chen Ping then came up with two crunching hits to give China two setpoints. Iran saved one with a massive thump by Amir Ghafour, but Zhang Chen did enough to push a spike through the Iran defence and earn China the first set.

China coach Zhou Jianan took his players off court after just three points of the second set – none of which they had won – as a confident Iran cruised into a five-point lead at the first TTO. Zhong Weijun added a couple of huge kills to keep China in the set, but Iran maintained a narrow lead through the second TTO with captain Nadi Alireza and Zarini leading their team. But China kept the pressure on. Bian Hongmin came up with a strong spike and a huge block on Mohammed Mousavi and Iran coach Julio Velasco called a timeout when China closed to within a point at 18-17. Zarini gave Iran some breathing space with two good hits, the second of which opened up a four-point gap at 21-17. A netted serve by Li Runming brought up setpoint at 24-20 and Reza Ghara brought the set scores level with an unchallenged kill.

The match stayed close in the 33-minute third set, with no more than two points in it in the opening phase. A massive blow by Ghara put Iran 15-12 ahead, but two super blocks – by Zhong on Ghara and Li on Farhad Ghaemi – brought the scores level at 15-15. Zarini helped his team into a two-point lead at 18-16 with two more big kills, but China were fighting hard and the scores were level again at 21-21, 22-22 and 23-23. Zarini delivered a massive blow down the middle to bring up setpoint, but Yuan Shi responded with a slick spike. Mousavi planted a big hit down the middle; Yuan responded with another cracking kill. Then China had the advantage. They failed on four straight setpoints before Zhang found space down the middle with a thumping drive that gave China a 2-1 advantage.

Excellent work by Ghaemi gave Iran the early edge in the fourth set and they were three points ahead at the first TTO. A thunderous spell of serving by Amir Ghafour then helped put Iran in the driving seat as they moved from 10-8 to 15-8. A less spectacular serve by Mousavi that hit the net cord and trickled over brought up setpoint at 24-13 and Zarini brought the teams level at 2-2 with a spike.

There was nothing between the two teams in the opening phase of the deciding set. The first team to open up a two-point gap was Iran at 9-7 on a spike down the right line by Ghafour. Ghaemi followed that up with a brutal serve that China couldn’t return. China clawed two points back before Mir Saeid Marouflakrani set up another Iran point with a fantastic dig. At 13-10, Ping Chen thumped a huge hit through the Iran defence and Ghafour then shot wide to put China within a point at 13-12. Velasco called a timeout and Zarini brought up matchpoint with a classy kill. An Iran block went wide, giving China hope, but Ghaemi finished things off with a drive through the China block.