Spain and Denmark showed top form in the last day of action for the second leg of the 2012 CEV Volleyball European League and scored important victories as they have embarked on a quest to qualify for the final four scheduled later this month. With the results signed this weekend in Teruel, Spain maintains the leadership of Pool A, with Slovakia in second position, and Denmark in third place. 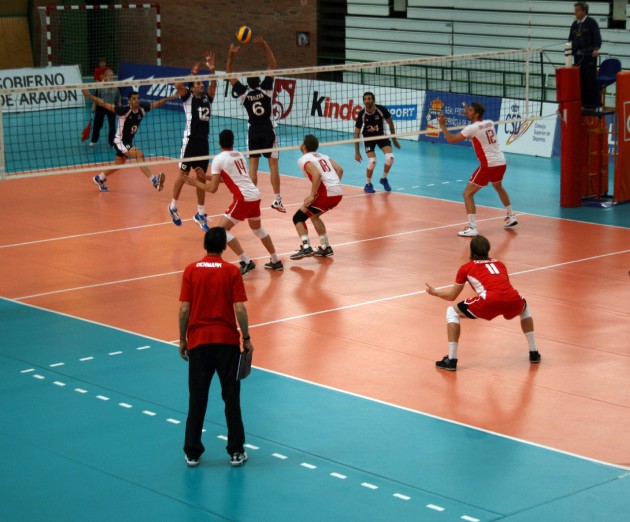 In the first match of the day, Denmark downed Greece (25-21, 28-26, and 25-23) in a three-setter determined by the superior physical power of the Danish squad. The team trained by Fred Sturm managed to edge its rivals through a valiant playing system, sustained by the powerful blocks of their mighty middle blockers and the effective spikes by Mads Ditlevsen and Casper Christiansen. Despite the efforts of the Greek players, especially in the second and third sets, Denmark was able to take the lead in the final parts of each and show great physical condition to close the match and achieve its second victory in the tournament.

“During two sets, on the second and third periods, we showed a good attitude but we made too many mistakes and Denmark deserved the victory”, said Greece’s head coach, Alekos Leonis. “Denmark played a very good match, very well organized and they clearly are the surprise of the tournament; we will try to improve for the next leg”, pointed out the Greek mentor.

“I admire and appreciate the effort my guys did today”, said Denmark head coach Fred Sturm, “they did a great job standing in the game and they were able to take advantage of the different situations to come back in the sets when we were down”, explained the head coach. Regarding the good performance of the squad in this debut of Denmark in the competition, Sturm added: “It is going to be hard for us; I just hope that in the next tournaments we stay healthy and we can continue with such good performances”.

In the second match of the day, Spain had to suffer in order to please the home crowd with a victory, as the locals had to fight until the tie-break to beat a bellicose Slovakia (24-26, 23-25, 25-17, 25-23, and 15-11). Slovakia surprised the crowd present at Los Planos sports hall with a strong performance, which allowed the team trained by Stefan Christiansky to lead the match 2:0. The Slovaks put Spain against the ropes through an effective strategy from the serving line, and through the creation of multiple problems for the Spanish distribution. The powerful spikes from the wings completed the great two periods of the visiting players, who took a convincing lead 26-24, 25-23 and put the match clearly on their side.

Spain was then forced to come from behind and the locals experienced a clear reaction in the third set, when the spikes by Iban Pérez and the setting by Guillermo Hernan allowed the home squad to show some lights to the darkness of their performance in this match. The 25-17 in set 3 gave some hope to the Spaniards, and the improvement of their quality created a sense of anticipation among the crowd, to induce a support that would be decisive in the fourth set. The equality, which lasted for most of the fourth period, was broken just at the end of the set, when the cheers from the stands and the powerful serves by team captain and local hero Guillermo Hernan put the 25-23 that sent the match to the tie-break.

In the sudden death, Spain took an early lead, which was enough to finish it off. The experienced Spaniards, together with the loud audience at Los Planos, stopped the Slovaks’ momentum, so the local heroes were able to seal it at 15-11 and close the game.

“We cannot say that we are happy, because we lost 2-3, but we need to be satisfied, as I know what kind of team we have now and I know the team we played against today”, said Slovakia head coach Stefan Chrtiansky. “After the first two sets, I was sure that Spain would come back, especially playing here; ultimately, they were more experienced than us”, added the head coach.

“We knew it would be an extremely difficult match”, said Spanish head coach, Fernando Muñoz, “we knew that Slovakia is a team that plays great and we only did our best after the third set. Sure, we need to improve many things but to make this effort and come back like we did, it is a reason to be satisfied with”, pointed out Muñoz.