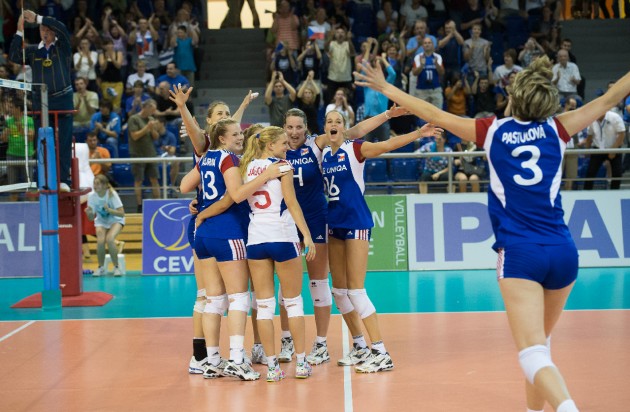 After struggling in the opening of the first set, the players coached by Italian-born Carlo Parisi went up 9:8 and 16:12, with a double block composed by Helena Havelkova and Kristyna Pastulova that eventually sealed the final 25-17 on the scoreboard.

The Netherlands asked for the first time-out as they trailed 2:5 in set 2 and actually got back on track by leveling the score at 11 all. A real fight for every single rally followed with the home side anchored by the duo Havelkova and Havlickova. As the score stood at 21 all, Parisi changed his diagonal line with Lucie Smutna and Tereza Vanzurova joining the game, providing the Czech side with two set balls and the provisional 2:0 after that affaire was sealed with the score of 25-23.

The Czechs went up 8:5 also in set 3 maintaining that gap (15:12) via Kossanyiova and Monzoni but the Netherlands flipped the score around (21:22) and could eventually go for the 2:1.

“The first two sets were easier than we expected, then we relaxed and the Netherlands got back into the game. Fortunately we displayed our best play in the tie-break” said Lucie Muhlsteinova of the Czech Republic. “The Netherlands have been working together already since some weeks and hence they have an advantage. The road for our team is still very long but this win tells us that we are going in the right direction. It is normal that we played well for only three sets as we still have to deal with some fatigue and drops in our focus. We tried out another option with Vanzurova and I am happy that she responded so well” said Carlo Parisi in the end.

“The Czechs played very well for the first two sets while we had problems in reception. Afterwards, we took more risks also from the serving line and they got under pressure. The tie-break was decided by the good service of the Czech team” singled out Dutch coach Gido Vermeulen, whose opposite – Lonneke Sloetjes – top scored in the game with 27 points.

Greece opened the program on Sunday afternoon at “Vodova” sports hall in Brno by scoring its first win in this year’s European League after edging Israel 3:1 (25-22, 25-19, 23-25, and 25-21). Greece opened strong by taking the first and second sets before Israel stormed back to re-open the match by seizing its third section. The players mentored by Dimitris Floros re-gained control of the operations in set 4 and could cruise to a well deserved win. Greece killed a total of 12 blocks while Israel could stamp only 4 and that was one of the key factors that contributed the final score of this match. Evgenia Tsima paced Greece to this win with a total of 21 points. “I am evidently happy with the result; we played quite aggressively and deserved to win this game” said Greece’s head coach Dimitris Floros. “We are very young and lack experience, so although we fought bravely, we could not put everything together to get a positive result out of this game. I still hope we can defeat Greece when it comes to the next round of the competition” said Israeli player Galit Devash.

WL M: Poland make it three from three in Katowice