Serbia defeated Iran 3-0 (30-28, 30-28, 25-22) in a scintillating match between the two top teams on the penultimate day of action in the FIVB Men’s Olympic Qualification Tournament at Tokyo Metropolitan Gymnasium on Saturday. 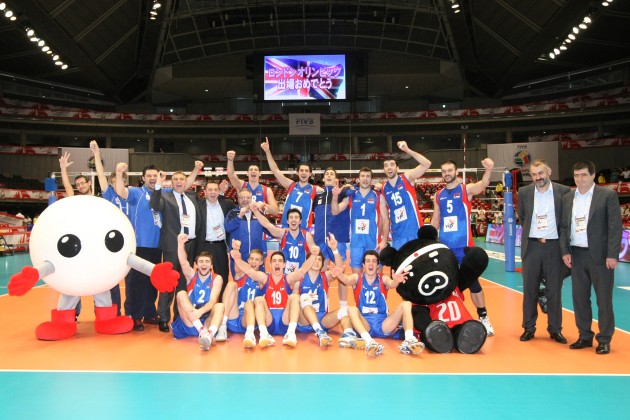 The result means Serbia have qualified for the London Olympics and they celebrated enthusiastically on court.

Both teams delivered some crisp spikes in the opening spell of the match, but the play of the phase came from some neat footwork by Iran’s Ghafour. However, his footballing skills weren’t enough to prevent Serbia leading 8-6 at the first technical timeout. But the game was close and Iran drew level at 8-8 when Nikola Kovacevic sent a serve long. Serbia edged ahead, but good attacking play by Ghafour kept Iran close. Iran coach Julio Velasco called the first timeout of the match when the gap stretched to 14-10 and Hamzeh Zarini responded with a brutal blow. But the gap was still four points at the second TTO. Three points later it was down to one and Serbia coach Igor Kolakovic called his players off court. Iran, led by Ghafour, were buzzing and moved into a 19-17 lead, prompting another Serbia timeout. Serbia made errors and Iran moved into a four-point lead. At 23-21, Aleksandar Atanasijevic planted a serve into the net to give Iran three setpoints. Kovacevic came up to serve and set up two vital points that drew the teams level. They stayed level through 28 when Kovacevic hit a winner down the left line for Serbia’s fifth straight setpoint. Iran then failed to set up an attack on the next play and Serbia had the first set.

There was nothing in it during the opening phase of the second set. Some more devastating serving from Kovacevic allowed Serbia to move two points ahead at 10-8 and Velasco called a timeout to try and disrupt his rhythm. It worked. The next serve hit the net and Iran were level at 10-10. The next break came when Serbia pulled off two super blocks – against Farhad Ghaemi and Alireza Nadi – to open up a two-point gap at the second TTO. Two Serbia errors – a netted serve by Marko Podrascanin and a mis-hit by Sasa Starovic – gave Iran a two-point advantage at 21-19, but a good block by Kovacevic on Zarini saw the teams level again at 22. And so it went on to 28-28 again, when Mohammad Mousavi sent a serve into the net, handing Serbia their second setpoint. Kovacevic then made a good dig before powering a spike through the Iran defence to put his team 2-0 ahead.

Iran came out a little flat in the opening phase of the third set and Velasco called a timeout with his team trailing 5-2. And that was how it stayed. The intensity of the first two sets was missing. Serbia were doing enough to stay ahead, but Iran were doing enough to stay in touch. Reza Ghara came in to add some bite around the second TTO, but his teammates had lost their spark. Velasco called a timeout at 15-20 and Iran responded with a good three-point burst that included two sharp spikes from Ghafour and a great block by Mousavi on Kovacevic. But Serbia pressed on and a spike by Starovic gave them three matchpoints. They blew one, but Iran captain Nadi then plonked a serve into the net to end a fine game with a whimper.