Iran beat Japan in the final match on the final day of action in the FIVB Men’s Olympic Qualification Tournament at Tokyo Metropolitan Gymnasium on Sunday. Iran edged Japan 3-0 (25-22, 35-33, 25-22) to finish with a 5-2 record. Japan dropped to 4-3. Both sides were out of the running for an Olympic berth after Australia clinched the final spot earlier in the day with a win over China. 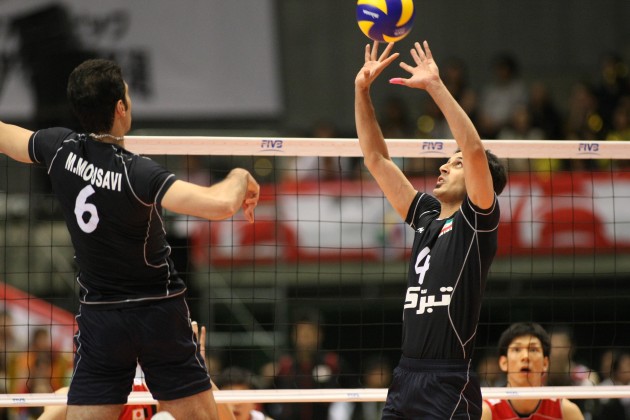 Iran were led by Amir Ghafour with 21 points, while Japan’s top scorer was Kunihiro Shimizu with 24. Iran outserved Japan 3-1 and outblocked them 10-3. Iran committed 18 errors to Japan’s 22.

Iran started out in lively fashion with Mohammad Mousavi gunning down three big hits early on. Japan got a fine service ace from Shimizu but trailed by two at the first technical timeout. A shot by Yusuke Ishijima brought Japan level and a super block by Shimizu on Ghafour put Japan ahead. But it stayed close. Both teams were serving big and making few errors. It was still all square at 14, but shots by Yoshihiko Matsumoto and Tatsuya Fukuzawa gave Japan a two-point lead at the second TTO. After a spike by Farhad Ghaemi, a block by Mousavi on Fukuzawa and a long shot by Fukuzawa, Japan coach Tatsuya Ueta called a timeout. Shimizu then sent a shot wide to give Iran a two-point lead. Iran stretched that to four after a serve by Mir Saeid Marouflakrani fooled Japan and dropped in, and Mousavi blocked Kota Yamamura. Iran coach Julio Velasco called a timeout after a big hit by Ishijima and a combination of cracking serve and thumping spike by Shimizu and Fukuzawa narrowed the gap to 23-21, but Ghaemi brought up setpoint at 24-21 and Ghafour put Iran 1-0 up with a spike through the Japan defence.

The second set was a humdinger. Japan started off brilliantly with a fantastic recovery save by Ishijima that set up a winner for Shimizu. But the game settled back in to a routine of nail-biting parity after that. Japan led 8-7 at the first TTO and upped that to 9-7 on a spike by Shimizu. Two errors by Iran put Japan 13-9 ahead and Velasco called for a timeout. But Japan got a little sloppy and after an error allowed Mousavi a winner, Ueta called a timeout. A good shot by Shimizu gave Japan a two-point margin at the second TTO and they were three ahead after a shot by Ishijima. From then on, it was tense and intense. Iran pushed back; Japan held on. Every point was huge. Japan pulled away from 21-19 to 23-19 on the back of a kill by Yoshihiko Matsumoto and a fabulous block by Yamamura on Alireza Nadi. Ghafour delivered two big ones and Akira Koshiya made a reception error to make it 23-22. Ueta called a timeout. Yamamura handed Japan two setpoints but two errors leveled the scores. Four times in a row, Shimizu banged out huge shots that gave Japan setpoint. Three of those four times, Ghafour came to the rescue for Iran. A block by Nadi on Fukuzawa turned the tables at 29-28 and then Japan had to save the setpoints. They did it over and over again until they were unable to handle a spike by Alireza Mobasheri and Iran were two sets ahead.

The intensity diminished only slightly at the start of the third set, but errors by Japan allowed Iran to open up a two-point lead at the first TTO with Mobasheri and Mousavi leading the way for the Iranians. Iran led all the way from 5-4 to 14-13, but never by more than two points. Japan drew level at 14-14 on the back of some rare sloppy play by Iran and then it was neck-and-neck again and the tension was back. Mobasheri delivered a couple of thunderbolts, but a rocket by Fukuzawa saw Japan go into the lead for the first time at 19-18. Iran got the edge again after a double-touch by Fukuzawa and were two points up after a super block by Mousavi on Ishijima. A big hit by Ishijima caught the net and sailed wide to hand Iran three matchpoints. Shimizu thundered in a response. Velasco called a timeout and fittingly Iran captain Nadi ended the match with a shot down the middle.