CEV President André Meyer and other members of the CEV Board of Administration visited this past Sunday the venue of the annual Power Cup, i.e. the world’s largest mass Volleyball festival that this time was held in Turku. 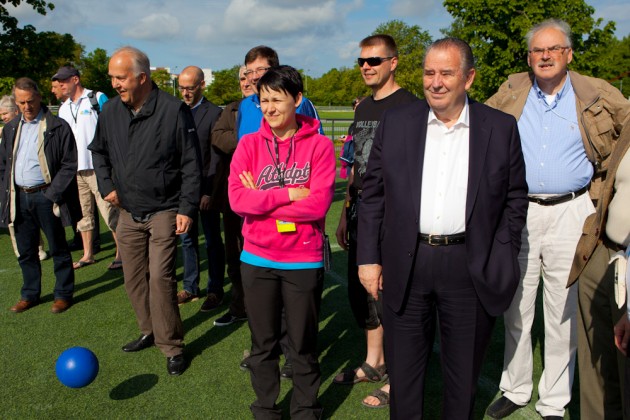 Mr. Meyer and his colleagues were accompanied by the President of the Finnish Volleyball Association, Mr. Arto Satonen, as they walked around there at “Kupittaa” outdoor area where thousands of kids were playing Volleyball.
“The ambiance is just fantastic” said Mr. Meyer. “It is amazing to see so many children that enjoy playing Volleyball that much. I think that Finland and the Power Cup shall be seen as a role model for mass Volleyball, I haven’t seen anything like this anywhere else. I was also told that the organizers are being helped by more than 600 volunteers; this is absolutely impressive”.
“I think that some other countries may well learn from Finland’s experience and organize something similar” added the CEV President. “I was informed that this is already the twenty-eighth edition of the Power Cup, which means that the concept of the event is really good. In my opinion it is good that the tournament is moving every year to a different city and touring across Finland. I also like that all players are involved for four days, playing from the start up to the end regardless of their results” he concluded.

WGP W: Poland goes through ups and downs in opening round of World Grand Prix