Today is 120 years since the first volleyball match in the history. The premiere game was held on February 9, 1895 in Massachusetts, USA. Since that time, this sport has developed and changed a lot. 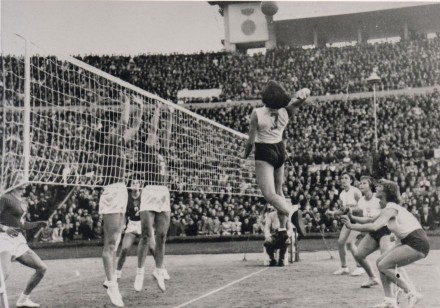 The originator of the volleyball rules was William G. Morgan – a teacher of physical education at the Young Men’s Christian Association (YMCA) in Holyoke, Massachusetts. On February 9, 1895 in the local gym, he held  the premiere show of a discipline created by him, which was then called Minonette.

Morgan then suggested a game that resembles to the current volleyball, as a competition to basketball and it was ment to be played by the people which are a little less physically fit. Those which could hardly play basketball.

The players had to hit the ball while putting their hands through the rope that was suspended low. In 1900, Alfred Holstead suggested that the game invented by Morgan should be named volley ball (flying ball) and the name caught on instantly (volleyball since 1952).

Volleyball quickly became popular throughout the world. In 1913, Manila hosted the first international tournament which involved Japan, China and Philippines. Volleyball went to Europe later through YMCA, and also with the entry of the US soldiers in Europe during the World War II.

Volleyball firstly became popular in France, than in 1919 it came to Czechoslovakia and Poland. Soon after, it came to the Baltic countries and Soviet Union.

In 1947, at the Congress in Paris, the International Volleyball Federation (FIVB) was born. Its first president was Paul Libaud (he held that position until 1984). Fourteen countries were among the FIVB’s founders: Belgium, Brazil, Czechoslovakia, Egypt, France, Netherlands, Yugoslavia, Poland, Portugal, Romania, Uruguay, USA, Hungary and Italy.

I want more games outside! Especially in summer time 🙂

You have beach volleyball now! GO and play!!!

No, I’I’m talking about volleybal. Did you watch opening match of the last World Championship?

PAGAMES W: What a day for Americans,...