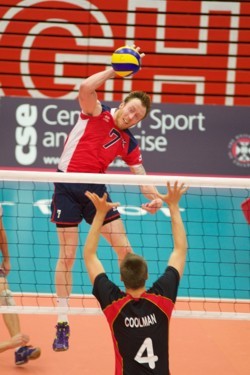 GB struggled to find their consistency and their service game let them down at critical times as they ran up 22 service errors in all. The British team get a chance of instant revenge with the teams due to meet again on Thursday and head coach Harry Brokking was pleased with many aspects of the GB game. Mark Plotyczer played his first match of the summer after a hand injury and made a decent contribution.

“We were not consistent and we lacked a bit of concentration on serve reception and we weren’t positive enough on service. Belgium kept their level consistently high and punished us” said Brokking. “But I’m happy with what I’ve seen and the performance of some of the players. Plotyczer did well in his first match. I was happy with Dami Bakare who had a decent match and Ben Pipes had a proper match and did not let his game go down when the team was going down.

There are a lot of positives to see and we need to find our consistency, mostly in serving, and keeping up the sharpness and concentration”.

Scot Mark McGivern, winning his 100th cap, served the first point but it was Belgium who held the early advantage in the first set as the GB service was erratic. Belgium led 8:6 at the first technical time-out but GB hit back with Dami Bakare showing how explosive he can be. He pulled GB level to 9:9 with a hit off the block and then, some steady serving from McGivern helped the home side take control to lead 16:13. But Belgium won the next four points under Pieter Coolman’s serving and GB coach Brokking was forced into a time-out at 17:19. Belgium kept up the pressure with Sam Deroo bringing up set point with a crosscourt smash and a mistake at the net from Nathan French gave them the set 25-19.

GB came out firing on all cylinders at the start of the second set. McGivern gave them a two-point advantage with a hit through the middle and, after Belgium hit back immediately, Bakare restored the two-point lead at 8:6.But the hosts were finding it difficult to break clear with Belgium trading punches and Bram Van Den Dries consistently finding a way through the GB block. A terrific serve from French looked an ace all the way but Deroo somehow managed to get a hand to it and Belgium went on to take the point to level at 14:14. Bakare was having an increasing influence as the set wore on blocking Van Den Dries to put GB back in front and then lifting the crowd by finding the floor with another explosive hit to take the home side to 19:16. It was an advantage they never looked like giving up and the closest the Belgians came was two points before the experienced Jason Haldane provided the killer punch as GB took the set 25-22.

GB led early in the third set but it was Belgium who held a slender one-point advantage 8:7 at the first technical time-out. They then moved up a gear with Simon Van De Voorde putting pressure on the GB passing game with some powerful serving and the Belgian lead was stretched to 16:10 at the next technical time-out. Haldane came on to try and turn the tide but the closest GB got was four points and two service aces by Van Den Dries brought up set point and Van De Voorde put away the final point through the middle, 25-15.

GB came out strongly at the start of the fourth set – Mark Plotyczer produced an exceptional crosscourt hit to establish a 12:10 lead but GB could not build on it. A service error let Belgium back into it and then Van Den Dries signaled that perhaps the set was going his team’s way when his service found the floor with the aid of the net cord. On his serve, Belgium won five unanswered points to take it to 18:14 in their favor. Belgium never wavered and went on to close out the match by taking the set 25-19 with Peter Bakare blocked out by Van De Voorde on match point.