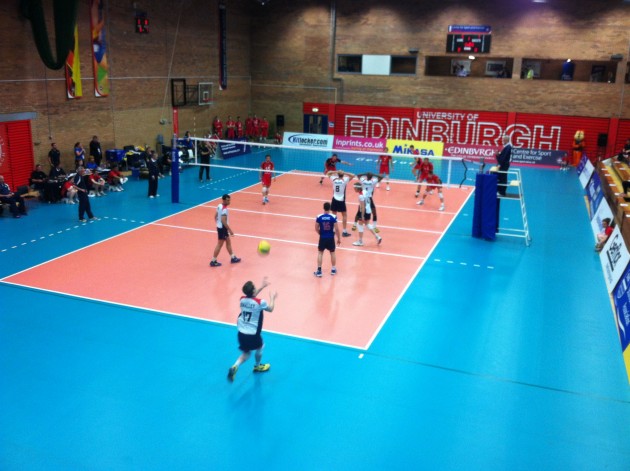 The hosts are taking on their European rivals as part of the preparations for the London 2012 Olympic Games. Earlier this week it was announced that they will face Italy, Poland, Argentina, Bulgaria and Australia in Pool A.

Coach Harry Brokking took a chance to look at his options and started with back-up setter Kieran O’Malley and centre Pete Bakare, keeping Dami Bakare and Chris Lamont on the sidelines throughout. It was a case of looking at his options before selecting his final Olympic squad for London with two players from his squad of 14 to be cut after Saturday’s final match against the Belgians. Understandably, Great Britain struggled to find their rhythm but they saved four match points – three in a thrilling third set which they managed to win.

GB won the opening point but Belgium, who had left the influential Bram Van Den Bries out of their starting six, took a grip of the set. A service ace from Simon Van De Voorde took the Belgians to 7-4 but GB closed the gap to one point at 7-8 when Pete Bakare pierced the Belgian block through the middle. But the home side – as they had in Tuesday’s opening loss – struggled with their service and Belgium pulled away to lead 18-13 before picking up the first set 25-18.

O’Malley resumed as setter at the start of the second set but it was Belgium who were out of the blocks first, establishing a 6-2 lead. Simon Van De Voorde kept up the pressure with a powerful hit through the middle to give Belgium a 17-12 lead and GB could not put together a string of points to get back in touch as Belgium took the set 25-20.

Belgium did not let their grip slacken and took an early 3-0 lead in the third set as Brokking sent Mark Plotyczer on for the first time. Belgium built a six point lead but the hosts rallied back to 15-17 thanks to some heavy serving from Jason Haldane. GB showed great resilience to keep in touch but it looked as if it was all to no avail as Van De Voorde found another gap through the middle to bring up match point at 24-23. But the home side would not give it up and saved no fewer than three match points with Haldane illustrating his experience with two lethal hits. Pete Bakare then stepped up to the plate and gave Great Britain their first set point with a huge block on Van Walle. Belgium saved it through a precision hit but Bakare responded swiftly to give his side another set point. This time captain Pipes produced an explosive serve which could not be retrieved and GB took the set 29-27.

Belgium hit back in the fourth and despite a block from Nathan French, Belgium reeled off four unanswered points including a service ace from Stijn D’Hulst which dropped just an inch inside the back-line. Wim Backaert turned up the heat when he smashed the ball at the feet of Haldane to put Belgium 19-13 ahead and from there they did not look back, clinching the set and the win.

“It is difficult when we started with a completely new team after Tuesday and from the beginning we were struggling to find our rhythm with all the subsitutions,” admitted Brokking. “But we had to come out of it and we didn’t which was disappointing. But we had a good look at the players before we make our decisions.“

“We saw in the third set when we brought players back that we had the organisation back but we had to keep it going in the fourth set and we didn’t. Unfortunately, we have to cut two players and I have to do it quicker than any other coach in the world which makes it even more difficult.“

“You can see there is a kind of tension on the court because of the cut in the squad and the players are feeling the pressure and it makes it more difficult for them than normal.”

The final match between the two will take place on Saturday.

MONTREUX 2016: Asian derby in the finals