After qualifying for the London Olympics this past May, Turkey women’s national team stretched that great momentum also to the prelims of the 2012 FIVB World Grand Prix where the players around head coach Marco Aurelio Motta swept all of their matches this past weekend in Beograd to be ranked third in the provisional standings compiled after two rounds of action. 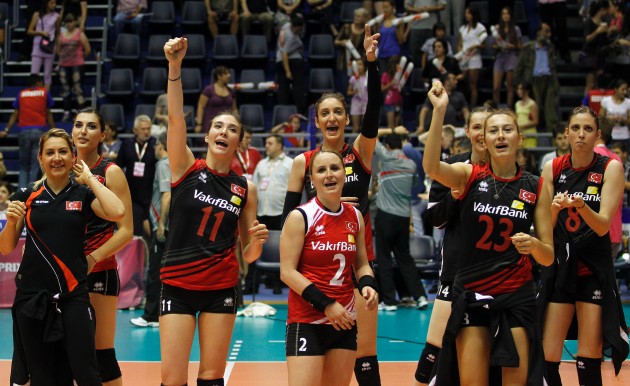 Turkey scored three 3:1 wins by powering past Cuba, Argentina and the local heroines of Serbia to improve its win/loss ratio to 5:1, with only the United States and China having so far cruised with no defeats at all through the two preliminary rounds that have opened the competition.

With this pace Turkey seems on a good track to make it to the finals that are scheduled for late June in Ningbo, China. Team captain Esra Gümüs said after the last win of her side over Serbia: “We are happy with the three victories in this tournament. Today we played against a good team. We had some problems, especially in reception, the Serbian block was very high so we needed to find a way around, with high balls primarily, but overall I can say that this was a good day for us”.

The other European teams competing in this year’s FIVB World Grand Prix have been less successful so far with Germany and Poland having scored three wins and suffered three losses each, while the ratio is even lower for the 2011 European champions of Serbia (2 matches won, 4 lost) and Italy, as the winners of the 2011 FIVB World Cup have claimed only one match in the competition.

The 2012 FIVB World Grand Prix will resume this coming weekend with Turkey going back to Asia to play Japan, Korea and Germany in Osaka, while Serbia will be playing the United States, Argentina and Thailand in Bangkok. Italy and Poland will continue their campaign in Taipei to play there the hosts as well as the Dominican Republic, another side that recently booked its ticket to London 2012.

ITA: Lega Pallavolo joined AIL in the National day for the fight against Leukemia, Lymphoma and Myeloma