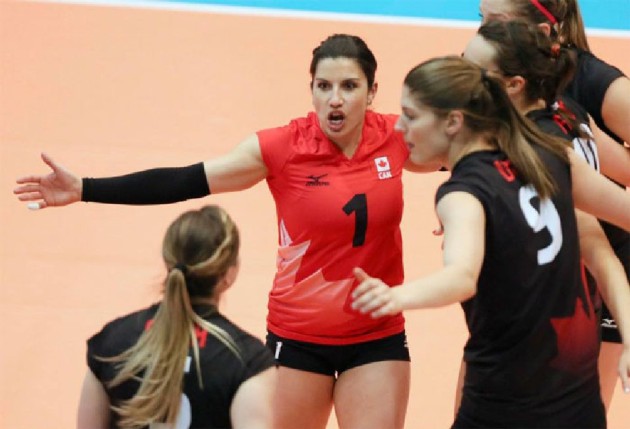 Canada dominated the first set, but kept the audience of 2,000 fans at the Corral at Stampede Park on their seats with a tight second and third set.

“It was a good start of the season,” said Canada’s coach, Arnd Ludwig.

“We tried a few new things, and that went well.  We didn’t put a lot of pressure on them at the beginning of the second and third sets and we came back. But we don’t want to do that tomorrow. We can’t be down like that.”

The teams will play again tomorrow at the same venue.

“We got off strong and then we just expected to maintain that and let them come back in the game and it wasn’t until they really put pressure on us, that we stepped up,” said team captain Brittney Page of Vernon, BC.

“It was our fault in the beginning letting them back in the game, and then it was good to see that we recovered. That was really important for us.”

More than 10,000 age-class athletes and coaches are competing at the BMO Centre and the University of Calgary from May 14 to 19; and the Canadian men’s team kicks off its World League campaign this weekend in Calgary, May 16 and 17 at 7 pm.

Many of the young athletes came out to support team Canada this evening:

“It was nice to feel the energy as soon as we came in. It was really exciting to have all the youth around and play in front of them. I think it was our job to build up the energy so when we weren’t doing well it just went flat,” said Page.

Kim released her own Mizuno T-shirt