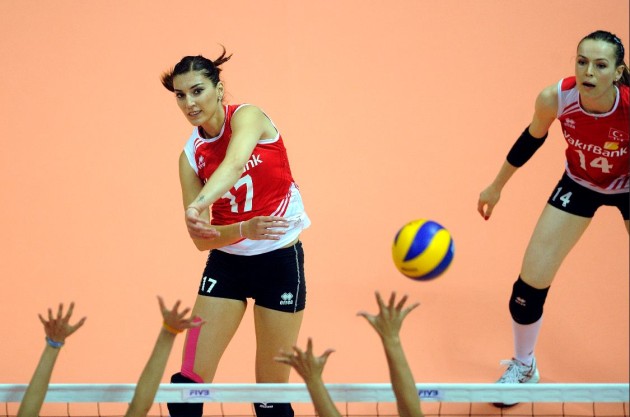 Darnel Neslihan notched up 27 points to lead Turkey over Thailand 3-1.

Neslihan Darnel led the match with 27 points while Neriman Ozsoy added 14 for the Turkish team.

Thailand were much shorter than their European opponents, but they made real trouble for the Turkey defense from the start of the match with their blitz attack. Thailand started with a 6-2 burst but Turkey soon geared up and steadily pull it back to 16-17 and a ace serve from Neriman Ozsoy tied the game at 22-all.

Ozsoy then flied high from the back row to smash a ball home to make it 23-22 before Turkey ran off all three points to clinch the opener 25-22.

The Turkey team started quite well in the second set, leading into the first TTO at 8-4 thanks to strenuous attack and their rivals’ errors in receiving, but a series of errors from Turkey allowed Thailand to level it to 14-all.

The Turkey girls finally cooled down and surged ahead again to make it 21-18 before Gumus Esra earned Turkey’s set point with a kill. Neslihan Darnel then served out the set with another powerful spike.

The Thailand team tried to consolidate their defense line in the third set and led the game at 6-2, but Turkey kept their morale high to level the game at 12-all.

Turkey focused on the back-row attack to stay away from the Thailand block and moved to 18-14, but too many mistakes allowed Thailand pull one set back at 25-20.

The two teams played more consistently in the fourth set where Thailand maintained an narrow advantage most of the way before Turkey overtook the lead at 17-15 with a 4-1 burst. After Ozsoy smashed home a ball to give Turkey two match point. Thailand managed to save one and lost the second to concede the set with 26-24.

MONTREUX: Japan and Turkey to fight for...