The United States women’s volleyball team, on the heels of winning the 2014 FIVB World Championship last October, are in unfamiliar roles as the 23rd edition of the FIVB World Grand Prix Finals play out July 22-26 in Omaha, Nebraska, USA. 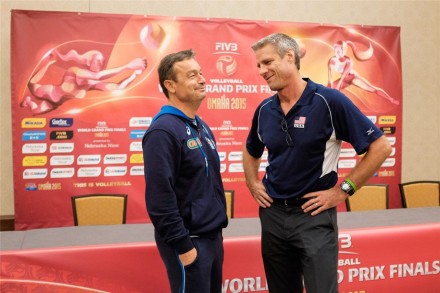 Head coach of USA Karch Kiraly welcomes the challenge as six of the top seven teams in the world have advanced through the nine-match preliminary round to earn a spot in the Finals.

“The World Grand Prix is part of the road to the Olympic Games as teams are preparing for the World Cup that starts in a month and a day,” Kiraly said. “All roads lead to Rio.”

While all roads may lead to Rio de Janeiro for the 2016 Olympic Games, Brazil must prepare for the big event next summer in different ways. And a chance at winning their third World Grand Prix title in three years is at stake.

“We are not playing in the World Cup next month as we are hosts of the Olympic Games,” said Paulo do Rego Barros, who is serving as head coach of Brazil during the World Grand Prix Finals. “We have to be able to put our players in a good position to improve and we needed to split our squad for this tournament and for the Pan American Games” that are currently taking place in Toronto.

“We are glad to be in Omaha, and it is a great pleasure to compete her with this team,” said An Jiajie, who is serving as head coach for China this week in place of Lang Ping. “I hope our team can out-compete ourselves against these strong teams as we prepare for World Cup next month.”

Japan head coach Masayoshi Manabe and his squad made the Finals on the very last day of the preliminaries and the additional matches are a chance for continued growth as a team.

“We are very glad to be here in Omaha,” Manabe said. “We received the ticket to Omaha at the last chance and hope to continue to improve.”

Italian coach Marco Bonitta and his squad are surprised to have gained a spot in this elite field in Omaha.

“We are surprised to reach the Final 6 as we are a young team, especially at setter” Bonitta commented. “Now we will do our best to improve our level of play day-by-day.”

As for hosting the premier annual international women’s volleyball tournament, Kiraly and USA look to reciprocate the hospitality shown by so many other countries that have hosted his teams through the years in various major tournaments.

“Over the last two years it has been USA’s pleasure to be hosted by every team competing in this week’s World Grand Prix Finals, and in every case we were wonderfully hosted,” Kiraly said. “And now we get our chance to get to host this most prestigious event on U.S. soil. We hope to do as wonderful of a job hosting this event as we have been hosted in past events.”

Don’t forget to vote for the BEST PLAYERS OF THE GRAND PRIX 2015!

These are women’s Top 5 opposites in...