WC M: Tense relations in Poland between Antiga and Drzyzga?

Despite the fact that Poland has perfect score at the World Cup in Japan after six rounds, some small tensions are present in its team. 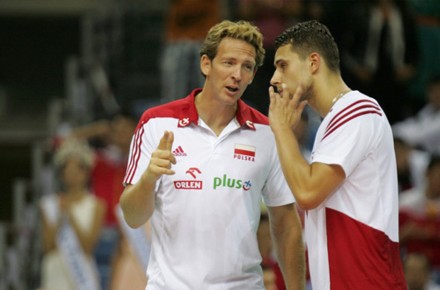 Fabian Drzyzga, the setter of the Polish national team, announced the silence towards media until the end of the tournament after the match against Canada.

Polish journalists were very surprised with his declaration especially beacuse he didn’t give any reasons for this.

Drzyzga started the clash versus Canada in the lineup, but in games before that, he was mostly sitting on the bench as head coach Stéphane Antiga unexpectedly decided to give chance to Grzegorz Łomacz.

Polish media guess that the reason for Drzyzga’s suden decision was his intention to avoid questions about clearly rough relationship with Antiga.

Drzyzga was supposed to be the primary setter of the Polish national team, but Antiga was calling Łomacz as „the first setter“ all the time at WC and also asked Paweł Zagumny to join the team for the European Championship in October.

PHOTO OF THE DAY: Two megastars hanging out – Bruninho & Neymar