Countdown has started in London, only four days to go for Olympic debut of Team GB 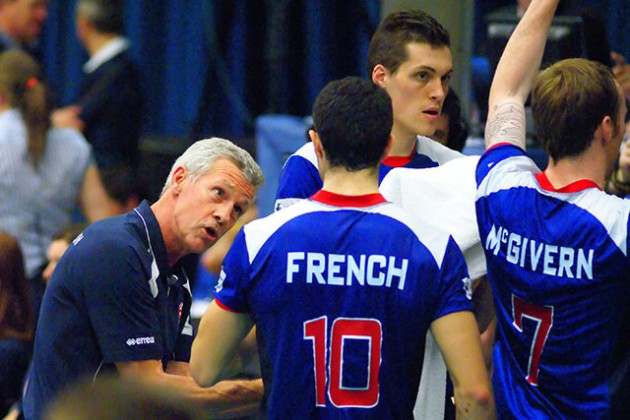 His guys will be debuting at Earls Court this coming Sunday playing Bulgaria in opening match of the men’s Olympic tournament. This will be the first time in history a GB team squares off in the Olympic arena with the additional flavor contributed by the support provided by the home fans. “Our biggest problem is that we still lack experience, so if we do well, this is mainly because of my players’ spirit” stresses Brokking. “And I am sure quite many people will open their eyes as they realize how talented some of the British players are”.

Their first opponent, Bulgaria, will be missing its absolute headliner, Matey Kaziyski, but it still remains a very strong side to reckon with. The group has been rejuvenated but will once again be captained by Vladimir Nikolov. The opposite player, 35, stands out as the leader of a young group whose primary goal is to make it to the 1/4 finals. “Our team is really young and the captaincy is a big pleasure for me. As I listen to their conversations and to their thoughts, I feel younger” stresses Nikolov. “Every match is important but we want to start the tournament with a victory and then proceed to the next game against Australia” singles out head coach Nayden Naydenov after completing a training session at Rokeby School.

If Team GB, regardless of the way this adventure is going to end up, is anyway going to write a piece of history, the United States are coming to London as the gold medalists from the previous edition of the Games held four years ago in Beijing. “This is a totally different team” points out team captain Clayton Stanley, “as some guys came in doing really good things but we also have the experience brought by some of the Beijing winners. We do not see ourselves as favorites but we will nevertheless try to defend our title. We have a good opportunity and the right team to go for it”. Team USA will open its Olympic campaign with a demanding task being confronted on Sunday with the 2011 European champions of Serbia. The players around head coach Alan Knipe recently finished second at the World League finals in Sofia and their mentor is well aware that although this result stands as a good omen for the Olympic tournament, still they have been assigned to a very tough preliminary group. “Russia and Brazil are very good but in this tournament you have plenty of teams who can make a good run at the medals. Germany got to the World League finals, while Serbia and Tunisia are playing well too” stresses Knipe.

The first day of the men’s tournament will be highlighted also by a family affair, as father and son will be crossing their ways at Earls Court for the opening match of the afternoon session. A bronze medalist from the 1988 Olympic Games in Seoul, Argentinean Jon Uriarte is the current head coach of Australia’s national team that quite surprisingly qualified for London 2012 via the World Olympic Qualification tournament held this past June in Tokyo, Japan. His son Nicolas is a very promising player who was voted MVP of the junior World Champs back in 2008 and is part of a group filled up with sons or nephews of that golden generation that included also his father. Facundo Conte, Rodrigo Quiroga, and Ivan Castellani are all stemming from Volleyball families but the 22-year old Nicolas will certainly find it quite emotional to see his dad standing on the other side of the net as he celebrates his Olympic debut.

Argentina, Australia, hosts Great Britain and Bulgaria were assigned to preliminary Pool A whose main favorites are undoubtedly Poland and Italy. These teams will be playing the first match of the night session at 8 pm local time on Sunday, a remake from the semifinal match of last year’s European Championship that was claimed, in straight sets, by the guys in blue jerseys mentored by head coach Mauro Berruto. However, since that day in Vienna Poland has gone a long way, claiming silver at the 2011 FIVB World Cup in Japan – thereby pocketing a pass for the London Olympics – and cruising to its first World League title only a couple of weeks ago in Sofia. Quite many observers feel Poland may go for gold here in London, thereby returning to the top after a group of national heroes had done so back in 1976 in Montreal. The group recently swept all of their matches at the annual “Memorial Wagner” in Zielona Gora, edging there Iran, Germany and Argentina in what was another tremendous show of strength by Bartosz Kurek & Co. “I was a little afraid before the start of the tournament because we were coming off some very intensive preparations but finally our performance lived up to my expectations. We have to keep that same level and quality also for the Olympics” said head coach Andrea Anastasi right upon scoring a third consecutive win in front of stands filled up with ecstatic fans there in eastern Poland.

If Poland and Italy are the clear-cut favorites in Pool A, the United States, Brazil and Russia compose a terrific trio that will certainly contribute classy matches right from the first days in Pool B. Brazil lost the last Olympic final to the United States and even though the group coached by Bernardo Rezende did not perform well in this year’s World League, they still remain the reigning world champions and a major force to reckon with along the way to Olympic glory. On the other hand, Russia won last year’s World League and World Cup: is it finally time for the heirs of the Soviet school to return to the top given that the last gold medal dates back to 1980 Olympics in Moscow? Serbia, Germany and Tunisia will have a tough job as they challenge these real volleyball powerhouses, but “You just can’t leave anybody out” says USA mentor Alan Knipe, thereby anticipating the great showdown all fans can barely wait for.