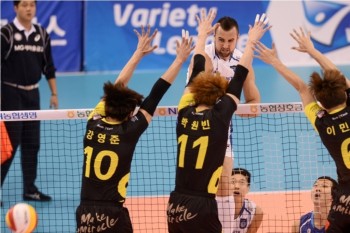 The streak goes on! Samsung Blue Fangs have scored their 6th consecutive win in domestic league! In the replay of the last season’s finals they have downed Rush & Cash after a thrilling five-setter and made the reigning champions suffer their 4th defeat in a row!

The man of the match was without any doubt Georgy Grozer who scored 40 points for the Blue Fangs! He obviously likes to play against Rush & Cash, just remember the previous clash between these two teams when the German international scored 48 points!

On the other side, Robertlandy Simon also had a great game, but his 38 points were not enough for the visitors.