The 2008 Olympic champions of USA beat Serbia in straight sets (25-17, 25-22, and 25-21) in their opening match of Pool B at Earls Court on Sunday afternoon. With this result the US Americans could improve their record with Serbia as entering into this game they had claimed only 3 out of 13 international matches against the 2011 European champions. US American rising star Matthew Anderson paced his side with 18 points while middle blocker Marko Podrascanin topped the charts for Serbia with 13. The USA outblocked Serbia 16 to 11 and their all-round performance was very consistent and solid. 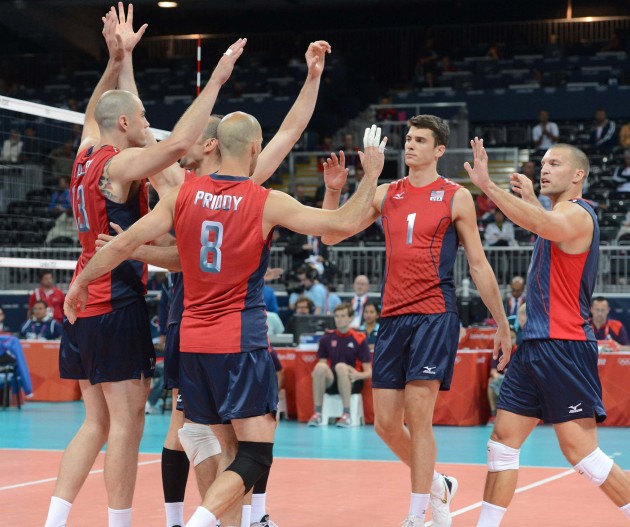 USA was the best team at the start with impressive spiking from Matthew Anderson and Clayton Stanley. They built on their lead thanks to fine blocking by their captain. Milos Nikic and Marko Podrascanin battled well for Serbia, but the USA were dominant as they took the first set 25-16. Anderson hit six unstoppable spikes in as many attempts in the opening set.

Serbia came back in the second set and Podrascanin continued his good form as he added to his points tally. USA kept in touch as William Priddy contributed well. The match was tight as the teams lacked consistency. Dragan Stankovic came into the match more as he helped Serbia take a two-point lead, but once again USA came back to draw level after a superb block by Priddy and his team established a lead that they managed to retain to take the second set 25-22.

The third set started evenly and a fine ace from Aleksandar Atanasijevic excited the crowd. However, USA showed their strength at the net and established a healthy lead. Priddy hit an incredible ace late on and although Serbia pushed them all the way, USA’s power was just too much to stand today.

USA will face Germany in their second preliminary round match on Tuesday, while Serbia is set to take on Tunisia on that same day.

Court in Tampere made first decision in...