Victory in three straight sets(25-20, 25 -8 and 25-20) gave Bermuda third place over St. Maarten in the play off stage of the 2014 FIVB world championship qualification women Round I Group D. 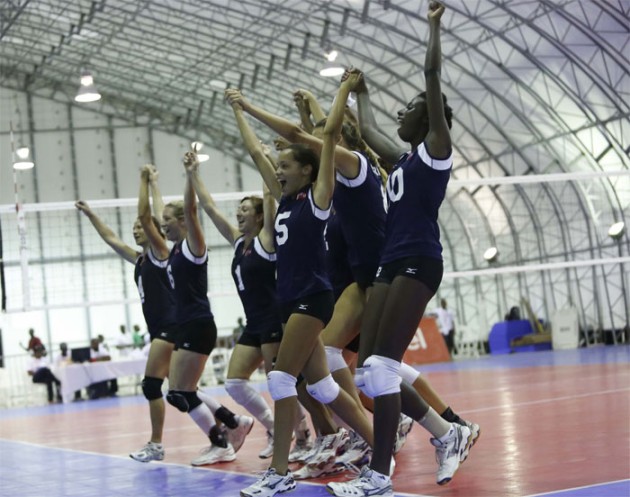 Briana Scott of Bermuda and Captain Lathasha Mills of St. Maarten both had 10 points to be the top scorers of the game

Bermuda 3rdplace qualifies them for the second round of the FIVB world championship qualification but they will miss out on the ECVA competition as only the first two teams qualify.

Coach Blee of Bermuda was extremely satisfied with the outcome. This victory means a great deal to the programme for the young girls to come and get some experience. During the game we got into a groove and played well as a unit.

Victoria Stevenson captain of team Bermuda kept smiling throughout the interview. We won, we won she exclaimed!

Coach Arrindell concluded that it was the inexperience of the squad that led to their demise. “The truth of the matter is our senior players at home are not really serious about volleyball and so we had to bring junior players to this tournament. So it was a case where inexperience got the better of us. However if we were able to clean up the unforced errors and better communication we could have done better he said.”

Captain Latasha Mills was near to tears as she felt that it was not their best effort. “We have to take the game more seriously and put in the real work on the training ground before coming to these tournaments”, she said.