Richard Lambourne, the libero of Team USA, is making his second Olympic appearance in London after the memorable days of Beijing where the group coached at that time by Hugh McCutcheon eventually claimed gold, twenty years after the back-to-back crowns taken by the generation of Karch Kiraly and Steve Timmons. “It is very meaningful to play at the Olympics and to represent our country here. We take it very seriously and our mentality drives us to always play the best and go for the maximum result. We have seen some strange results in the other group, where Italy has finished fourth in the standings. So far our team has responded very well and we are totally pleased with the results we have scored in the prelims”. 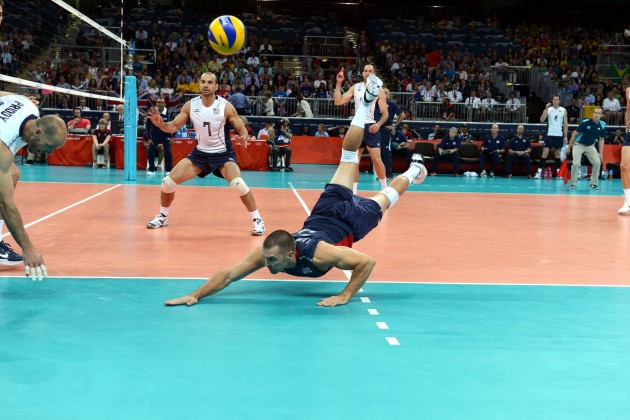 Lambourne has toured the world since he started playing volleyball but is convinced those golden days of the Beijing Olympics quite evidently remain the absolute highlight of his long career. “That was a memorable experience and it would be fabulous if we could repeat that same feat here in London”. Team USA has massively improved since the start of the season and it looks like the Olympics have contributed some additional motivation to the group: “We take it as any other volleyball tournament. We know the Olympics are something special, as you have got a lot of attention from the media, the pressure you won’t feel anywhere else, but so far we have been able to stick to our plans, taking it match by match”.

Quite many American fans have followed his actions from the stands of Earls Court, but the US libero knows that kind of ambiance is quite a trademark in Poland, a country where he played for a few seasons. “I spent some years there and you always get large crowds, they are totally crazy for the sport, we have seen it a couple of times as we played the World League finals. They can get 13,000 people in the sports hall and quite regularly, this is just amazing”. Lambourne lists Vienna as his favorite city after playing for a couple of years for the hotVolleys, a club that used to be the dominant force in Austria’s national league. “Probably volleyball is not at its highest level there, as you have only a couple of teams that are really competitive, but I just loved the city and living there”.

Lambourne, who is 37, spent a couple of years in Japan back during his youth as he was devoting his time to a church foundation. “Actually while being there I did not play volleyball at all. I was just doing something totally different, but got the chance to learn the language and that was a nice time”. Asian volleyball has been struggling to compete with the world’s elite in the past couple of decades and even though Japan was not the place where Richard got involved in the sport, he feels Asia’s supremacy from the ‘60s and ‘70s has been totally dismantled by the evolution and development of the sport. “I think it is not a question of mentality and coaching skills. It is more about physicality: if you take Clayton Stanley, for instance, in Japan you won’t find any guy who is physically so strong and powerful, at least in volleyball”.

Richard does not know what’s next after the Olympics. Maybe he will stop playing and start a second career as volleyball coach, but he leaves the door open. “I still do not know what the plans are for the national team and if they will need my help and contribution also for the next years. I definitely do not want stop playing because I really love it, but this is something I will disclose once the Olympic Games have come to a close. It would be great to make it to the 2014 Worlds. In my position, as there is less jumping, you can last a little bit longer, we’ll see”. For the time being, Lambourne hopes the mixture of youth and experience that has been brought together by coach Alan Knipe will help Team USA continue its march and get a medal by this coming weekend at Earls Court.