The United States opened its title defense of the NORCECA Men’s Junior Continental Championship with a 25-12, 25-12, 25-16 victory over Honduras Monday evening at the U.S. Olympic Training Center in Colorado Springs, Colorado. 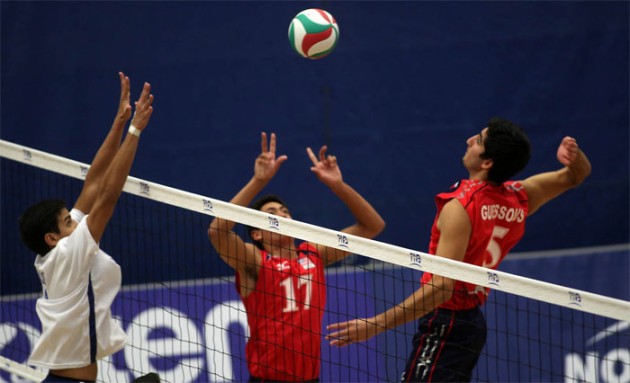 The United States produced an 13-0 service ace margin and out-blocked Honduras 11-5. Honduras limited its errors to 12 for the match, compared to 22 of the USA.

The United States built an early 10-2 lead in the opening set and pushed to a 25-12 victory as the Americans tallied five blocks and four aces. In the second set, USA raced to an 8-1 advantage at the first technical timeout and cruised to a 25-12 victory. Honduras scored the first two points of the third set, only to have the U.S. rattled off four straight points for a 5-3 lead sparking the Americans to a 25-16 victory.

United States hosts St. Vincent and the Grenadines in a Pool A match on Tuesday evening at 17:30, while Honduras resumes against Mexico at 13:00.

“We would like to congratulate the Honduras team”, United States head coach Peter Hanson said. “Honduras played with great energy. On our side we were focused and were able to get all 12 players into the match.”

“Coming into the match, we knew Honduras was an athletic team that had the potential to hit hard”, United States captain Micah Christenson said. “We wanted to concentrate on our side of the net, working on our block and refining our game.”

“We knew it would be tough tonight with the height of the United States players”, Honduras captain Ricardo Vasquez said. “We wanted to compensate for the height difference with our reception and try to defend every ball that we could.”

“The USA’s serve was hard and that was the major difference”, Honduras head coach Rony Martinez said. “Their team has height with a good block, and that complicated our attack. We want to congratulate the USA and wish them well in the tournament.”