AVC M: Iran pulled off a dramatic win over India

Vinh Phuc, Vietnam, September 2, 2012 – Defending two-time champions and Asian winners Iran on Sunday pulled off a dramatic 3-1 (26-24 27-29 27-25 25-22) win over less-ranked India in a clash of the Titans in the 3rd AVC Asian Men’s Cup Volleyball Championship at the Vinh Phuc Competition Hall here. 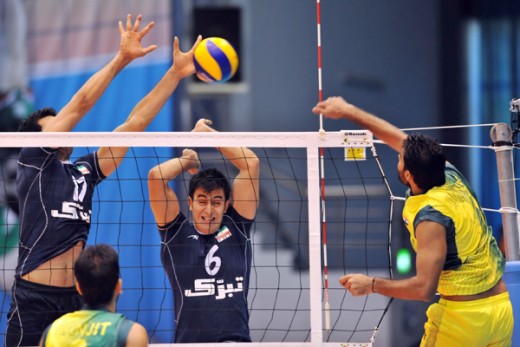 Playing in Pool B, Iran, the FIVB world No.14 which fielded their B team in quest for a hat-trick of victory in the biennial tournament after their victory in 2008 in Nakhon Ratchasima, Thailand and 2010 on home soil, boosted their confidence following the first-match win over archrivals China on the opening day.

Iran started encouragingly to lead 5-3 before the Indians held their nerves and hit back aggressively, with hard-attacking Sannjay Kumar, who won the Best Scorer Award at the previous episode in Urmia, Iran, showing his class and power at the net. India scored successive five points to surge ahead Iran 8-5. From then on, both sides traded attacks for the 23-23 equaliser.

As the Indians became more prone with unforced spiking mistakes, the more consistent Iran stormed on to win the close first set 26-24.

Soleymani Mahammadrezs and Alireza Jadidi remained the Iran’s dominant forces in the second set, which they took the initial 13-8 lead. India cruised their ways back to tie the score 23-23 and 24-24. Both teams poured everything to try and play. India put on gutsy display, with S. Prabagaran and Gurinder Singha attacking devastatingly to help their team take the exhausting set 29-27.

After a 1-1 draw, Iran showed no mercy to their formidable rivals to race to 5-1 lead in the third set before the Indians bounced back mightily to catch up with the title-holders 21-21.

The on-going battle became the same script as the previous set when both sides took turns leading. However, Iran fared better, with Ukkra Pandian produced a twinkling serve which rebounded off George Vibin’s hands to land behind the back court. Iran took the hotly-contested set 27-25.

In the fourth set, both teams came up with almost the same standard, but Iran gradually showed their class when their solid blocks worked out pretty well. After leading 23-21, Iran continued their aggression. Alireza Jadidi and Sohail Ahmadi stretched the lead to 24-21 after effectively blocking Gurinder Singh. India saved one matchpoint before a powerful Jadidi’s fast spike to the mid court went unanswered. Iran won the set 25-22 and the match.

Alireza Jadidi scored the highest 15 points for Iran, while Gurinder Singh led India with a match-high 23 points, 21 of them through deadly spikes.

“It’s a good match against India. They always played tough against us. Whenever we take on each other, India always tried hard to beat us. This time, we are only junior players who still need valuable experience. I have never thought that it will be easy to beat India. They are very strong and are one of the favourites to be reckoned with in this tournament”, said Iran’s head coach Vakili F. Reza.

Iran next take on Australia in their last preliminary match on Monday.