A herculean effort by Bermuda in a come from behind victory over Anguilla (16-25,16-25,28-26,26-24 and 15 -10) brought the biggest upset to the FIVB Men’s World Championship Qualification Tournament NORCECA Group D. 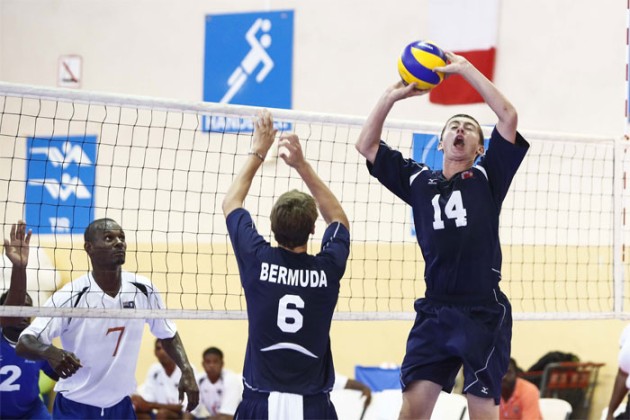 Anguilla was touted to win the game handsomely to stake a claim for second place but Bermuda had a different script.

Coach Bill Bucci of Bermuda wore a huge bright smile. “I am smiling not just because we won but the manner in which we won. It was all about building confidence and building momentum. Even when we lost the first two sets we felt that we enjoying the game and building a momentum so when we took the third set we were very difficult to stop”, he stated.

Coach Jason Liburd and Captain Ian Connor were both devastated. “I doubt that we would have the fortitude to play again if we had a game remaining. It is even worse when we consider that it is a team that we could defeat”, said Captain Ian Connor in disappointment.

Brian Amaro (9) and Ian Bucci (8) combine to lead the Bermudan attack with 17 spikes while Sherwin Richardson led all scorers with 16 points in a losing cause.

Anguilla left praying that French St. Martin would defeat Dutch St. Maarten to allow them third place while Bermuda left with the comfort that their learning curve had moved in a positive direction.

AVC M: Iran pulled off a dramatic win over India