A tough encounter between South Korea and India is expected to highlight the quarter-finals of the 3rd AVC Asian Men’s Cup Volleyball Championship at the Vinh Phuc Competition Hall on Wednesday, with the winners advancing to the semi-finals. 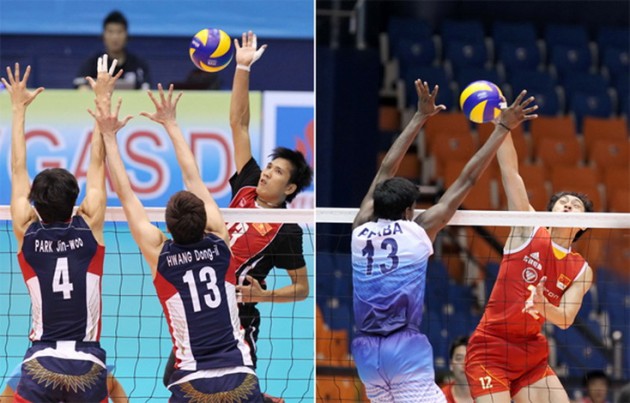 The pool round-robin preliminaries ended on Monday. Only two unbeaten teams – the Guangzhou Asian Games winners Japan and Iran, defending two-time champions and the current Asian winners – top their Pool A and Pool B respectively.

In the quarter-finals, Japan are due to take on the FIVB world No.11 Australia, the Asia’s best ranked team. Japan came much stronger this time to erase their nightmarish memory in the previous edition in Urmia, Iran two years ago when they finished last among eight participating teams.

Japan, with the likes of hard-hitting Takashi Dekita and Hidetomo Hoshino, are ready to revive their fortunes in Vinh Phuc. However, Australia, though represented by their national men’s junior squad in a long-haul preparation for the 2016 Rio de Janeiro Olympic Games, cannot be underestimated.

The more matches the Aussies have been playing in the tournament, the stronger they have become, tactically and technically. Therefore, the Japan–Australia clash must be one of the eye-catching matches the enthusiasts should keep their eyes on.

However, the highlight of the Wednesday’s quarter-finals should be the tough battle between India and South Korea as both teams are apparent to have all important elements which can make them the winning team.

“Tuesday was the rest day, but we trained intensively to make sure that we are best-prepared for our next crucial match. Every team is very strong and we can’t underestimate any side,” said India’s head coach G.E. Sridharan.

As India finished third in the previous Asian Cup in 2010, South Korea also returned with the similar position in the Tehran-hosted Asian meet last year. India, whose height average is 198cm against the rivals’ 194cm, have major forces in powerful attackers Gurinder Singh and S. Prabagaran, while the South Koreans are all national players.

According to statistics of individual skills in the preliminaries, Jeon Kwang-In emerged as the best spiker and Oh Jae-Seong the best digger among all outstanding players whose points earned have been accumulated.

Therefore, both India and South Korea have the similar chances of making the cut for the semi-finals.

The other two matches see the Asian powerhouses Iran take on Myanmar and hosts Vietnam go up against China. With the greater experience and form, Iran and China have been tipped to topple their less-ranked rivals.

However, anything can happen in a sporting competition. Of all the four matches in the quarter-finals on Wednesday, only the teams with better preparations and forms will win and make it to the 1st-4th semi-finals, while the losers will be relegated to the 5th-8th classification.

Ranking after the conclusion of the pool round-robin preliminaries

ROAD TO RIO: These teams have qualified...