At the Buenos Aires Province House in Buenos Aires took place this Monday afternoon the official launching of the 5th edition of the World Challenge Volleyball Cup 2012, international competition that will take place at Once Unidos Stadium in the city of Mar del Plata, September 18th - 23rd with the presence of teams from Brazil, Canada, USA, Japan and two powerful Argentine teams of the National A1 Seniors' Teams, Personal Bolivar and the host team of Buenos Aires Unidos. 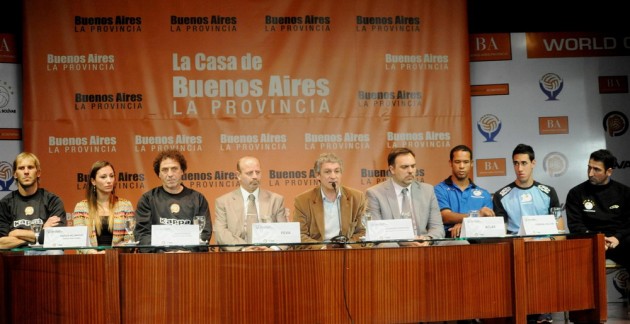 The main table at the official launching

The official opening took place with the presence of the Buenos Aires Province Sport Secretary, Alejandro Rodriguez; the Under-Secretary Director of the Buenos Aires Province Houses, Evelyn Ramos; the Under-Secretary of the Federated Sports of the Province, Juan Manuel Lopez Gomez; the General Secretary of the Argentine Volleyball Federation, Gabriel Salvia; the President of the Argentine Volleyball Teams League Association, Oscar Boccalandro and of course, a delegation of the participants: Marcelo Silva, Assistant Coach of Personal Bolivar and his players Angel Dennis (Cuba) and the Olympic Argentine Pablo Crer; and the Coach of Buenos Aires Unidos, Waldo Kantor and the start of the team, Marcos Milinkovic.

Alejandro Rodríguez: “It is with pride for our province, that works so hard in all sports, to have such an important volleyball event. It is another organization challenge and one step forward in our working policy to broadcast sport in a region that has, for example, 60 per cent of the national sport representation at international competitions”.

Marcelo Silva – Bolivar Assistant Coach: “For us it is a very important tournament and with history in our background. Bolivar won it a couple of times and could not do so in the last two editions so the idea is to show our utmost and use it as preparation for the Argentine A1 League”.

Pablo Crer (Bolivar Player): “With pride we play this important international tournament with great rivals. It will be a great experience for us as we are getting to know each other in a new team heading towards a very demanding season”.

Angel Dennis: “We have another goal apart from having a very strong team. For us it will be our first competition and will be very useful because we do not know each other pretty well”.

Waldo Kantor: “The power and important of the teams talks about this tournament. As host team we have the engagement of showing our utmost level and we have prepared ourselves to do the best we know in the field. The tournament also is a great sign of the growth of Argentine volleyball and of all the teams that participate of it”.

Marcos Milinkovic: “This season we have a great goal and it is to participate of the final series of the Argentine A1 League. This demanding competition will be good for our training and to make our team more confident as it changed a lot. We will do our utmost to show our best output”.