Romania’s ladies completed their home run in Piatra Neamt with a third consecutive win, this time against Great Britain (3:1, 26-28, 25-23, 25-18, and 25-22) to top the standings of Pool D at the end of the first round and waiting for the second series of matches coming up next week in Rovinj, Croatia. 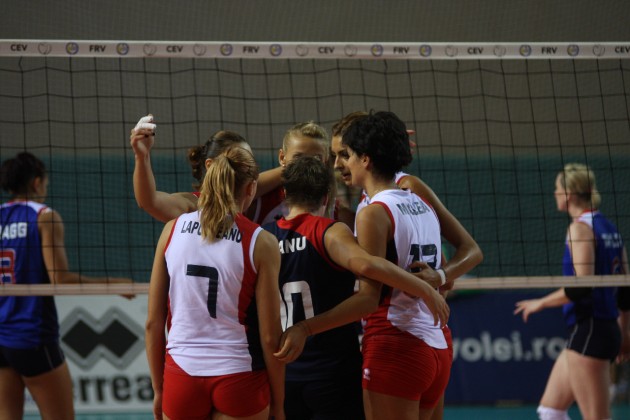 Romania started out well going up 8:3 and then 13:4 as Great Britain was evidently struggling in reception. Romania then stretched the lead to 16:7 by the second technical time-out but some errors paved the way for the British comeback, with the score being leveled at 23 all. Elena Lapusneanu, Nneka Onyejekwe and Denisa Rogojinaru scored for Romania in attack but GB captain Lynne Beattie took her side by the hand and the guests could eventually celebrate the provisional 1:0.

Romania opted for young setter Sabina Miclea Grigoruta in set 2 and the score stayed close there; Romania eventually got a slim margin by the second technical time-out (16:13) helped by Denisa Rogojinaru from the serving line; the attacks killed by Lapusneanu stretched the gap but similarly to the previous set Great Britain fought back before Daiana Muresan could finish it off at 25-23.

The guests opened well in set 3 going up 8:5 before Romania got back on track with Muresan, Onyejekwe and the addition of Adina Salaoru. Still GB was up 16:14 by the second technical time-out but Muresan played superbly and helped her side cruise to the final 25-18 and 2:1.

Showing their improvement after their Olympic campaign, Team GB did not surrender and Grace Carter joined the game in set 4, the Brits went to the front (8:6) but Lapusneanu and once again Muresan proved to be decisive for the home side. Romania went ahead 16:15 and even though Carter was able to draw level at 22, the next points were all for the local heroines who pocketed their third win in the group (25-22).

By edging Portugal in straight sets (25-13, 25-7, and 25-7), Croatia made sure on Saturday they finished the first round robin in second place. Croatia started out very strong and their opposite Sanja Popovic simply destroyed Portugal’s defense line. By adding some good blocks Croatia went up 8:2 and the great actions by Antonija Kaleb contributed some more pressure, with a massive 16:5 calling for the second technical time-out. Portugal fought bravely especially with wing spiker Fabiola Gomes but Croatia comfortably sailed to the final 25-13.

Croatia’s dominance was even more embarrassing in the second set where the side anchored by setter Bernarda Brcic moved up 8:2 and 16:6; great blocks and the always splendid spikes of Popovic paved the way for a terrific 25-7 and the provisional 2:0.

The game followed a similar plot in set 3 where the serving turn of Popovic moved the count to 8:3 for Croatia. She eventually added some more spikes to her personal count (16:5) with Portugal being able to score only two more points before the game came to a close (25-7).

EC M: Greece bounces back with superb win over Finland to stay in contention for European ticket