EC M: Greece bounces back with superb win over Finland to stay in contention for European ticket

Greece surprised everybody with a superb win against Finland (3:0; 25-19, 25-21, and 25-23) in the last day of action in Trikala thereby keeping alive their chances to qualify for the final round of the European Championship. 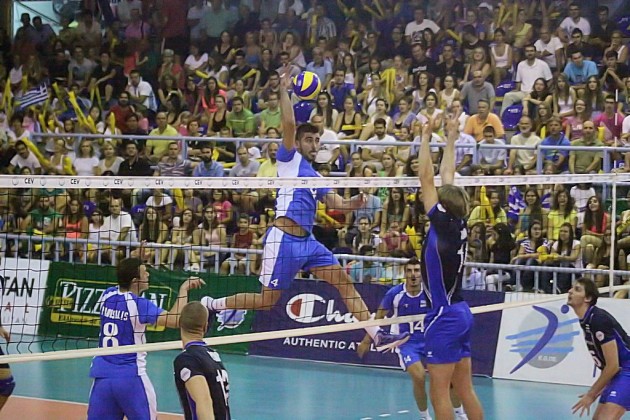 With 2,500 fans cheering for the hosts, the team of head coach Alekos Leonis succeeded in edging the pre-favorite Finns, thereby completing that home campaign in third place with five points, one less than Finland and Montenegro.

The service of Costas Christofidelis moved the score up to 13:12 for the hosts, while a block from Mitar Tzourits to stop Antti Siltala stretched the margin to 20:16. The Greek opposite aced for the 24:18 and a mistake by Matti Oivanen completed the set.

Greece started out strong in the second set too, even though the Finns tried to react. A yellow card to Siltala because of protests created some frustration among the guests and head coach Daniel Castellani changed him for Matti Hietanen. Two consecutive points by Tzourits made it 19:17 and two more from Costas Prousalis paved the way for the 22:18. Later, after missing a set ball, the hosts could finish the set via a mistake by Olli Pekka Ojansivu (25-21).

With Siltala on the bench and Hietanen in the starting six, the Finns played much better in the early phases of the third set. Two block points moved the score to 10:5, but Greece had the right answers. Tzourits attacked for the 9:11 and Christofidelis stopped Olli Kunnari for the 18:20. Then a couple of aces from Tzourits drew level at 21 all. Georgios Petreas blocked Ojansivu (23:22) and a mistake from Eemi Tervaportti concluded the match at 25-23.

“We celebrate tonight one of the greatest victories in history. The guys played for themselves and showed much passion. Congratulations to all of them. I would like to thank the fans in Trikala who supported us throughout these three days” said head coach Alekos Leonis.

“The Greeks played very well. They pushed us with their serve and they had an 80% of efficiency with their side out, which is a very high percentage. It was really difficult for us as we didn’t play good” admitted Finland’s coach who couldn’t hide his disappointment.