Though the Danish women cashed their first set win today on the last day of action for the European qualifier – Pool B in Apeldoorn, it was Ukraine that won the opening match. After four sets, the runner up in the group left the playing field as the overall match winner: (3:1; 25-12, 23-25, 25-15 and 25-12). 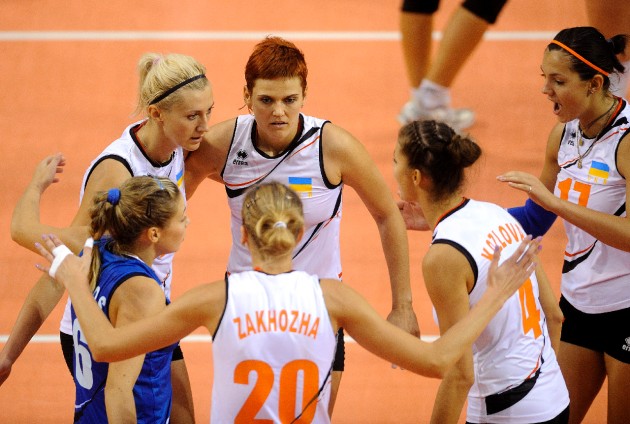 Ukraine did what they were to do in the first set. The margin was six points already at the first obligatory time-out and had grown out to eleven points at the second one (5:16). With Juliane Daugaard on service position, the Danish women managed to score three points in a row (6:19, 9:19), but finally Maryna Marchenko gave her side a series of set balls, after which Galyna Shchur finished the job.

Denmark took a cheeky lead in the opening phase of the second act (3:0), an ace of Lykke Degner brought 6:3 on the scoreboard. When Julie Jensen was able to serve from 6:4 to 12:4, Ukrainian coach Andriy Romanovych furiously called his team on the side. Ukraine was clearly struggling, whereas the Danish women cheerfully played their best set in Apeldoorn up to then. Still Ukraine managed to even the score at 14, but when libero Viktoriya Delros missed another pass, Denmark led with 17:15. After a block of Danish top scorer Lykke Degner, Romanovych substituted his setter for the second time in the set (20:15). Ukraine managed to take back the lead (22:23), but after another Ukrainian unforced error, it was set point for Denmark (24:23). A well-placed Danish block evened the score in sets.

Denmark opened the score in the third set, but Ukraine immediately took back the lead and walked away from the Danish opponents (4:8). Denmark found the connection again (7:8), but Ukraine clearly had other plans. Via 9:13 and 10:21, the team of Romanovych ended the set in clear numbers: 15-25.

The teams were quite equivalent in the first phase of the fourth set, but when the Ukrainian women marched from 10:12 to 10:15, the Danish resistance seemed to be broken. A block contributed the first of a series of match points for the Eastern Europeans. Trine Kjelstrup unwillingly ended the first match in Apeldoorn today (25-12).

ITA W: Grazietti and La Rosa are going on loan from Chieri

WoV in Manila – VakifBank left no...