Leuven, Belgium, January 5, 2012. Euphony ASSE-LENNIK – one of the rookies included in the starting field of this year’s CEV Volleyball Champions League – recently qualified for the final of the Belgian national cup as the group mentored by Dutch head coach Marko Klok edged twice Knack ROESELARE 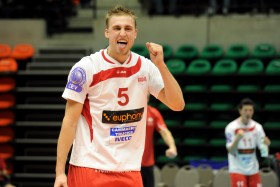 After claiming the home match with the score of 3:1, his players stamped a stellar 3:0 away win on Wednesday evening.

Euphony displayed great rhythm and used the experience taken from the adventure in Europe’s most elitist competition to stay cool in the decisive moments of the game. ROESELARE could not find a way to stop Dutch opposite Robin Overbeeke (pictured) and suffered another defeat after being eliminated by Euphony from the finals of last year’s national league.

“Our season is still very long, our goal is to win the Cup and tonight we made a huge step forward. However, we first have to concentrate on our next match for the national league where we will play once again our rivals from Roeselare” stresses head coach Marko Klok.

The final match of the national cup is scheduled for February 12 in the great scenario provided by the “Lotto Arena” in Antwerp. The opponent of Euphony will be the winner of the second semi slated for late January and starring Noliko MAASEIK vs. Prefaxis MENEN