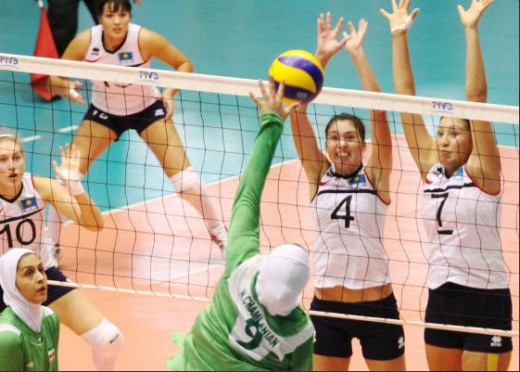 Things turned sour for Kazakhstan in the second set although they played well up to their standard. Iran changed their tactics to rely mostly on excellent drops and spikes from the back court, allowing Kazakhstan blocking difficulties. The Kazakhs hit back with mighty attacks, but the rivals, powered by a smashing machine Neda Chamlanian, were just uncatchable. Iran clinched the second set 25-23.

Kazakhstan used their height advantage to attack well in the following sets, but Iran blunted their aggressions with a splendid teamwork and drastically-improved form. To the rivals’ great astonishment, Iran captured the remaining sets 25-22, 25-18 and the see-saw encounter.

In the 9th-16 playoffs in Pool G, Sri Lanka captured their first win in the championship following a 25-6, 25-5, 25-13 win over young, inexperienced Kuwait in a totally one-sided match.

Apsara Senewirathna emerged as the top scorer of Sri Lanka after winning 11 points, while Kuwaitis Shatha Al-huneidi, Lina Najem and Ebtesam Al-enezi gave their team one point apiece from their spikes.

Meanwhile, New Zealand made their mark in the match against Hong Kong to outclass the smaller-built rivals in straight sets 25-19, 25-10, 25-18.