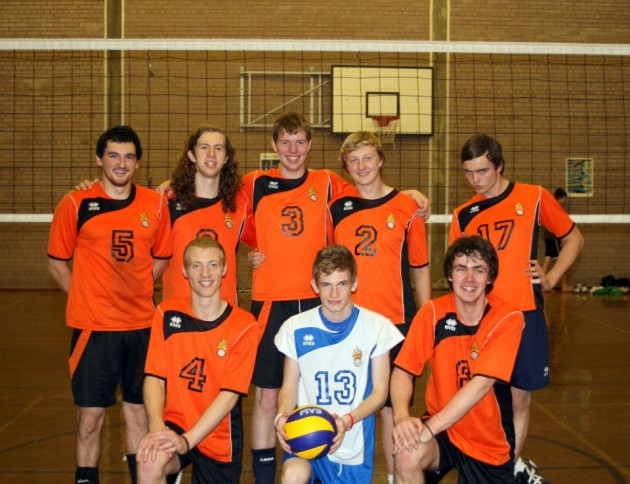 The tournament was made up of four teams including the local side Ballymoney Blaze, Lisburn Lynx, Queens, and Richhill Raiders (last season’s league and cup double winners). The format was decided that teams would play two sets against each other in a round robin style with a final match at the end of the day determining the winner. The stage was set for a fantastic day of Volleyball with a high standard of teams.

The tournament started with Ballymoney Blaze drawn against Richhill Raiders. Both sides made a nervous start and Richhill edged the first set 24-26. Blaze made a few tactical changes for the second and came out knowing that they would win the match if they could beat Richhill by more than two points. Blaze put in a disciplined performance, forcing Richhill into errors and keeping their own mistakes to a minimum and this enabled them to take the second set 25-17 and win the match with a better points total overall.

Next up was Queens vs. Lisburn Lynx. Both sides brought squads with a mix of youth and experience, but Queens had better strength in depth and were able to put away the ball when necessary in order to take the match two sets to nil (25-18 and 25-20).

The third match of the day saw Richhill Raiders take on Queens with Queens looking to consolidate their previous victory and guarantee a place in the final and Richhill hoping for more consistent play in their game. This was a tight game with neither side giving up points easily. Queens took the first set 22-25 but Richhill fought back strong in the second taking it 25-14 and with that the match with a better points difference.

Ballymoney Blaze then had two games in a row vs. Lisburn Lynx and Queens. The Blaze team has lost a few players this season and has some players playing different positions but as this pre season tournament progressed you could see the team gelling together with each game. They took the first match 2-0 (25-13 and 25-17) and then kept their composure to win the Queens match 2-0 as well (25-19 and 25-17).

This left the last match to be played as Richhill vs. Lynx. Queens needed Lynx to upset the odds to have a chance of appearing in the final and Richhill needed a 2-0 victory to be guaranteed their spot. Lynx showed good spirit and fight from a team including a player playing his first Volleyball tournament and they were almost rewarded with the first set, but Richhill hung on at the end taking it 25-23. Richhill came out stronger in the second set and managed to win it 25-12 and put themselves into the final.

The final was between Ballymoney Blaze and Richhill Raiders. Blaze had grown in confidence throughout the day and their play in the final conveyed this. They played good Volleyball – calm and collected – and put the Richhill defense under a lot of pressure with smart serving and strong attacking. Blaze didn’t allow Richhill to get a foothold on the game and won the final in two sets (25-6 and 25-15).

The new league starts soon with Blaze’s first match at home on Monday October 15 vs. Queens at 7:30pm in Dalriada Sports Hall.