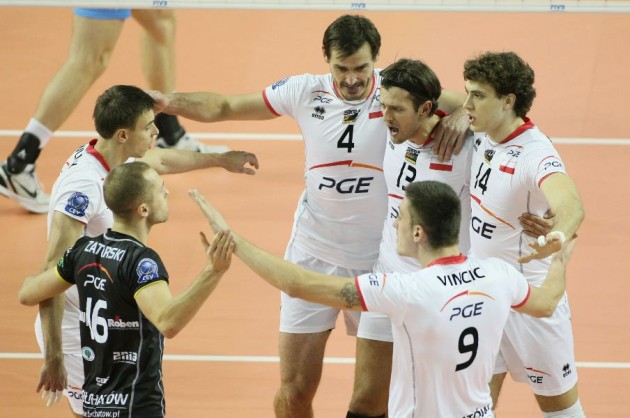 The winners held a 7-6 margin in aces while the defeated team led in blocks 7-6. The big difference was in the unforced errors where Zenit Kazan totaled 38 to 24 by PGE Skra Belchatow.

Zenit Kazan was in front 8-6 at the first stop behind the actions of Anderson and Vermiglio while PGE Skra Belchatow stayed close thanks to Wlazly and Winiarski. Zenit’s Mikhaylov stretched the difference to 13-9. PGE Skra cut the distance to 14-12 via the spikes of Atanasijevic  and also the attack of Abrosimov out of bounds. Mikhaylov scored with a tip for the 16-12 score. Anderson opened the gap to 19-14 and PGE Skra called time-out. Wlazly reduced the margin with a bullet from the left side and the score was 19-17 after a missed spike from Zenit side. Winiarski served an ace to close within one point but Mikhaylov landed his spike from left sector. Apalikov blocked against Atanasijevic for 21-18 and Wlazly hit one out of bounds. At 22-18, PGE Skra called time-out again. Anderson served long and Kolodinsky scored with a block to close to within two points. Demakov’s serve sailed long. Wlazly hit a smash but Mikhaylov tallied his seventh point to close at 25-21.

Anderson blocked Atanasijevic for a 3-1 lead in the second set and then it was the chance of Aaplikov against Atanasijevic for the 4-1. Anderson hit one off the block for a four-point lead at 5-1 and PGE called time at 5-1. Winiarski snapped the rally but Anderson came back with spike and ace. Zenit was in front 8-4 in the second set. Wlazly reopened action with a big spike and Plinski served an ace to cut the lead to 8-6. Abrosimov and Anderson were responsible for two Zenit’s points. PGE Skra came back on the shoulders of Wlazly and Winiarski to tie the score at 14-all. Mikhaylov gave back the lead to Zenit but Demankov tied the score again. Mikhaylov broke the equalized score for a 16-15 advantage. Atanasijevic tied it again with a soft touch. With the evened score at 22-all, Mikhaylov delivered a potent spike and PGE Skra called for time-out. After another tied score, Atanasijevic planted a powerful shot for PGE Skra set-point. Yosleyer Cala produced the difference and the score tied at 1-1.

The trio of Anderson, Mikhaylov and Sivolhelez helped Zenit Kazan to establish advantages of 8-5 and 16-12 for the two technical time outs of the third set while Anatasijevic seemed to be playing with new batteries. Anderson served his second ace of the match for a 22-15 difference. At 22-16, Apalikov connected his spike against the PGE Skra block. Atanasijevic laced a massive kill from the right side. Abrosimov hit from the center for set-point at 24-17 and Sivolhelez closed with a bomb at 25-17 for Zenit Kazan.

It was a close affair in the early stages of the fourth set. At 2-2 Apalikov served long but Anderson made up for it with his formidable spike. Mihhaylov served too long but Sivolhelez levitated from left side to score for Zenit. Sivolhelez served an ace for 6-4 but then mishandled his volley. Abrosimov and Cala exchanged points and Apalikov attacked too long for a tie at 7-all. Mikhaylov broke the evened score. With the score 9-9 Cala served an ace but Zenit Kazan came back to level up things again. PGE went in front by two points at 12-10. Winiarski and Atanasijevic kept the difference in favor of the Polish side that led 16-14 at the second TTO. Cala scored with his block for a three-point lead and Mikhaylov’s attack sailed long. At 18-14, this time Mikhaylov responded but also Plinski did. Sivolhelez attacked of the block but Mikhaylov crashed his serve. Atansijevic produced a crosscourt spike but Plinski netted the serve. Kooistra was positive for PGE Skra down the middle (22-17). After a failed serve by Atanasijevic he came from back court to score once again. PGE Skra took the fourth set 25-19.

In the tie-breaker, Sivolhelez capped a long rally hitting against the PGE block for the first point. Anderson served an ace for 2-0 and then netted the next one. Mikhaylov gave Zenit a 3-1 lead but Sivolhelez failed with his kill attempt. Cala served an ace with a soft one for PGE to tie at 3-3. Then he continued with hard serve on the back line for a 4-3 advantage. An error produced a tie at 4. Mihaylov failed the serve but Abrosimov evened the score. At 6-6, Abrosimov served into the net but Mikhaylov scored for Zenit to tie at 7-all. Atanasijevic broke the equalized score. Mikhaylov tied again but Anderson’s serve was just long. Plinski scored on a quick attack from the center of the net and Cala increased the distance to three points (11-8). Mikhaylov shaved one point but Atanasijevic answered back. Mikhaylov hit one out of bounds and PGE had a 13-9 advantage. Cala’s serve was way out. Atansijevic hit one for match-point and the Polish club won 15-10.

FRA M: Skrimov thought it would be harder to win