RENTINO Diatec of Italy earned the chance to defend their crown at the 2012 Men’s FIVB Club World Championship after demolishing Zenit KAZAN of Russia in straight sets. If they win in the final this will be their fourth consecutive crown at Club World Champs. Read latest volleyball news on Worldofvolley.com. 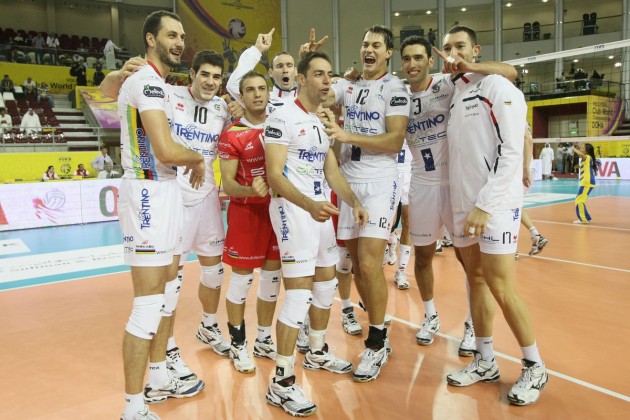 It was a well-deserved victory for the Italian team that displayed high-quality Volleyball during the three sets against a Russian side that seemed out of sync for the whole match.

TRENTINO Diatec out-blocked the opponents 10-1 and also held a 6-3 advantage in the service winners charts. Jan Stokr was the main scorer with 19 points, 18 of them with his spikes. Osmany Juantorena finished with three aces and two blocks among his 17 points while Matey Kaziyski and Mitar Tzourits registered 11 and 8 points with Tzourits recording three blocks. Maxim Mikhaylov had 11 points in the subpar performance of Zenit KAZAN.

Mikhaylov, who is also the team captain of Zenit, said: “We are feeling very sad for this unexpected defeat. We made so many mistakes and this led us to such a heavy defeat”.

Head coach Vladimir Alekno: “I am sad for the result. We were looking forward to playing the final. The main reasons for the defeat are that we played against one the best teams in the world and we committed too many mistakes”.

Matey Kaziyski, captain of TRENTINO Diatec: “We are very happy for this great win. We played against a strong team that we know very well, and now our minds will be fully focused on tomorrow’s final match”.

His mentor Radostin Stoytchev added: “I am happy for the victory. The score does not reflect the good performance of our opponents. Now, we have to relax and concentrate on tomorrow’s final. We will do our best to win the title”.

TRENTINO will be challenged there by Sada Cruzeiro of Brazil that booked their ticket in the final match by scoring a thrilling five-set victory (25-22, 23-25, 27-25, 23-25, and 15-9) over Poland’s PGE Skra BELCHATOW. Douglas Cordeiro led Sada Cruzeiro with 15 points followed by Mauricio Leal’s 11 tallies. Felipe Ferraz and Mauricio Borges each had 10 points while Wallace de Souza and Yadier Sanchez contributed 9 apiece. Aleksandar Atanasijevic topped all the scorers of the match with 29 points, including four blocks while Michal Winiarski and Mariusz Wlazly added 14 and 13 respectively. The winners held a 7-2 advantage in aces while the defeated side was better in the blocking category 11-6.