Sollys Nestle of Brazil defeated Rabita Baku of Azerbaijan to claim the gold medal of the Women’s FIVB Club World Championship at the Aspire Zone Hall of Doha. Sheilla Castro, Thaisa Menezes, Jaqueline Carvalho and Fernanda Rodrigues were the best in Sollys. Madelaynne Montaño and Natasa Krsmanovic in Rabita. 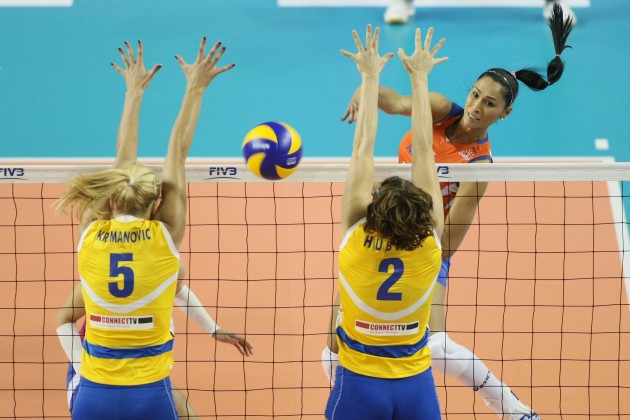 It was the first crown for the Brazilian club in the history of the tournament following second and third finishes in the past two events of the annual competition.

The trio of Sheilla Castro, Thaisa Menezes and Jaqueline Carvalho, all members of the Brazilian squad that won the gold medal in the Olympic Games, topped the scoring for Sollys Nestle with 15, 14 and12 points respectively. Fernanda Rodrigues, also a veteran of the successful team in London, added 8 points.

Madelaynne Montaño was the best scorer of the dethroned Rabita Baku with 14 points followed by Natasa Krsmanovic who finished with seven.

Both teams recorded five blocks and the new champions held the edge 5-4 in service aces. The Brazilians made 11 unforced errors to 18 by the losing squad.

The combination of Sheilla Castro and Jaqueline Carvalho had a hot start scoring three and two spikes for an 8-4 lead at the first technical time out. The Brazilian side increased the margin to 16-11 at the second TTO with Jaqueline capping the attack with a solid hit. Middle blockers Adenizia Silva and Thaisa Menezes were also part of the terrific start. Rabita Baku’s coach called for time-out with his side trailing 19-11. Madelaynne Montaño was the most consistent for Rabita Baku in the first set that finished 25-16.

Menezes opened the scoring in the second set with a spike from the center and Sollys Nestle led 8-2 at the first technical time-out. Then Rabita mounted a reaction led by Montaño and Krsmanovic to cut the lead to 8-6. After and ace by Golubovic, Menezes scored twice to enhance the margin to 13-9. Montaño hit an impressive kill from the back court but Menezes was red-hot and scored again. Menezes provided a five-point lead at 15-10 and the attack of Krsmanovic was long for a 16-10 score at the second technical pause. Sheilla scored with two aces and Adenizia blocked Montaño for a 22-12 difference. The lopsided set finished 25-14.

Fernanda Rodrigues broke a 6-6 tie with her spike but Montaño responded to tie at 7-all. Thaisa provided the difference at the first technical time-out. Sollys Nestle increased the distance to 16-12 at the second pause. Thaisa capped a long exchange with a touch that lanced in the right corner for an 18-13 score. At 20-14 Gabriella Souza served an ace. Krsmanovic and Rodrigues traded big blows for 22-15. Krsmanovic scored again but Hubner-Grun’s attack was wide. Sheilla produced for match-point at 24-16 and Montaño kept Rabita alive for a moment as she served too long and Sollys won the championship.

For more news from the Club World Championship click here.

ITA W: Coach Gaspari and Barcellini speak of the match with Urbino

POL M: Lukasz Szarek – Sometimes we can make a surprise