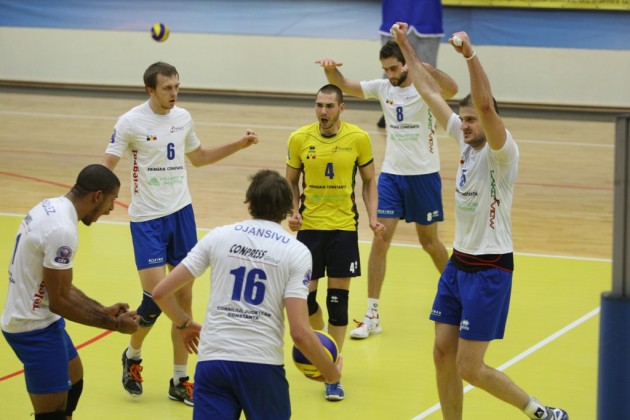 Tomis eventually scored a 3:1 win (23-25, 25-21, 25-21, and 25-23) after two hours of play to keep a perfect record after three rounds of action. Tomis currently tops the charts with nine points while last year’s champions Remat ZALAU are ranked only ninth with a single point.

Tomis set the pace of the game in the opening set going up 22:19 and 23:22 but Remat scored three in a row to flip the score around and go for the provisional 1:0. The hosts of CONSTANTA comfortably claimed set 2 and 3 with a double 25-21; in the fourth section, Remat could come back from 14:17 to move up 21:19 but it was Tomis that had the best final rush down the stretch to clip the final 3:1.

Olli-Pekka Ojansivu top scored for Tomis with 23 points well supported by Marko Bojic with 19 and Sergiu Spinu with 16. Serban Pascan had a match-high 25 points for Remat while Robinson Dvoranen scored 13.

“We went through ups and downs and helped our opponents come back in the fourth set” said the head coach of Tomis CONSTANTA, Radovan Gacic. “However, a victory remains a victory and this is what really matters at the end of the day. I hope we will display a good performance in Moscow for our debut in the Champions League”.

“We had our chances to win this match but Tomis played much better in the key moments. We still have to work a lot and improve the quality of our play in all fundamentals” singled out the mentor of Remat ZALAU, Mariusz Sordyl.

FRA M: Delpech is not afraid of Chaumont