Japan win against host China 3-1 at the 2012 Asian Youth Girls’ Championship. Sarina Koga is MVP of the Championship. Read more about latest volleyball news, games reports, and statistics on WorldofVolley. 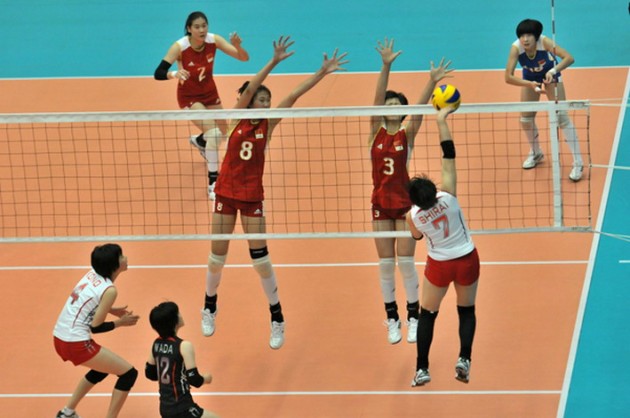 The Japanese side relied on their most formidable scoring weapon Sarina Koga to steer past the equally tenacious Chinese lineup. Koga played a consistent game, launching ferociously from her patented area at left wing, and soaring from the backline as well.

The Chinese squad relied on their strong frontline to impose a tough challenge on Japan. Yuan Xinyue unleashed her unyielding attacks down the middle. Wang Yunlu and Hu Mingyuan likewise provided the offensive guns at the wings.

But the Chinese blockers could not post effective defence against the Koga scoring machine. Once the Japanese hitter took the first step, it was nearly impossible for her defenders to catch up and attempt at decent deflection.

Japanese setter Airi Tahara performed excellent orchestration of the Japanese offense, setting up Koga with clockwork precision. She also enabled Shino Nakata and Misaki Shirai to operate effectively at the wings, to steer Japan towards their fourth consecutive title, following their feats in 2007, 2008, and 2010. Their first title was achieved during the tournament’s first edition in 1997.

Earlier, Chinese Taipei triumphed against Korea, 3-0 (26-24, 26-24, 25-17) in the battle for third. Tseng Wanling emerged as a force at the middle for the Chinese Taipei side, scoring a total of 18 points. Lee Yu likewise worked on a strong game from the wings, with a 13-point contribution. Korea tried to retaliate with Lee Hanbi and Jimin Kyeong converting with their attacks. But Chinese Taipei broke their opponents’ attacking rhythm with Tseng inflicting a huge threat upfront. The Korean hitters suffered from misfires and errors and toppled out of contention.

Chinese Taipei vastly improved from their 5th place finish in 2010.

Japan, China and Chinese Taipei will qualify for the FIVB Girls Youth World Championship in 2013 as the top three teams of Asia.

TYR W: Vakifbank returns in action hoping to score win in opening round

Who needs hands when we can use...

CRO W: Poljak to retire after this...