In the second home match ACH Volley LJUBLJANA faced its opponent for the next two legs, Euphony ASSE-LENNIK from Belgium, and cruised to a 3:0 win. Read latest volleyball news on Worldofvolley.com. 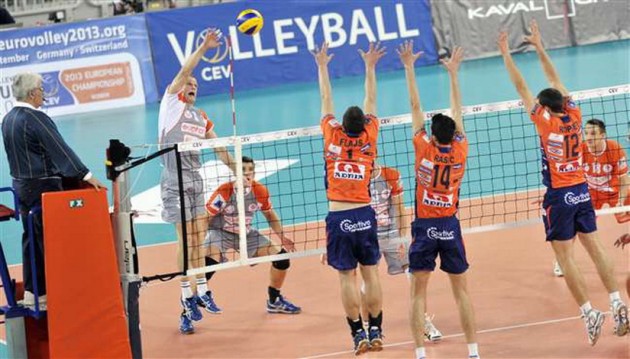 With this result ACH Volley is ranked third in Pool D whose charts are topped by Lube Banca Marche MACERATA of Italy with 9 points.

The first match against the Belgian opponent began according to the hosts’ wishes, with ACH Volley taking the lead right from the start. And although the guests had a few moments where they could reduce the difference ACH Volley’s players never allowed them to come too close, winning the first set 25-19.

The second set was far more tied, with both teams exchanging the lead. After a great serve by Andrej Flajs the team from Ljubljana finally managed to escape by two points, which gave its players the push they needed, forcing the Belgian coach to call a time-out. In the final minutes ACH Volley added a few blocks to their attacks and the second set went to the home team (25-15).

In the third set the team from Belgium was not ready to surrender and fought hard, winning a two-point lead at the first technical time-out. But ACH Volley’s wing-spiker Uroš Kovačević was determined to stop them (12:9) and the Belgian team quickly suffered the consequences of that “storm”. Its attacks were not that powerful and ACH Volley’s lead only grew little by little. With great serves the home team brought the third set to an end and won its first Champions League match in this season. MVP of the match was Uroš Kovačević from ACH Volley who scored 22 points.

ACH Volley’s captain Andrej Flajs was extremely happy about the win: “I am very satisfied with our performance tonight and I believe we have played an interesting game. The three points are great news with a positive effect on our self-esteem. And of course we are also going for the win in Belgium next week”.

CL W: Turkish giant too much to handle for DRESDNER SC

Do you remember these volleyball fails? (VIDEO)