Beijing, China, January 15, 2012 – The Chinese Women’s National League witnessed a dramatic rally between Tianjin Bridgestone club and Army Komen Noodle club during their clash last week with the ball played an astonishing 38 times before Tianjin came away with the point. 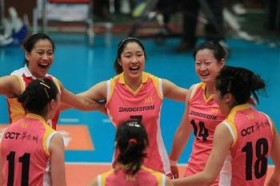 Both sides defied stamina to continue the play before a double block against the 17th attack from the Army team saw them lose the point.

The rally started with a serve from Tianjin’s Yin Na, a former national team spiker before play went back and forth, despite quick attacks from the likes of Tianjin’s 17-year old middle blocker Wang Ning and Army’s wing spiker Sun Xiaoqing.

However it was the latter who let the point go as the 27-year old veteran was unexpectedly foiled by a double blocking from Tianjin’s Ning and Li Yin, bringing home the crucial point.

Both are currently chasing down a place in the top eight with Army sitting fourth with 11 points and Tianjin fifth with 10.

Guangdong Evergrande, Shanghai Dunlop and Jiangsu ECE are the top three sides with 17, 14 and 11 points respectively.

The Women’s National League started on December 11 with a total of 12 teams participating.

The League will conclude on March 6.

How to clean floor after practice (VIDEO)