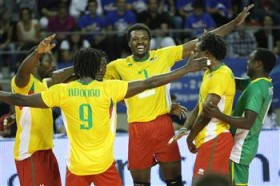 London 2012 berth at stake in Cameroon

Five teams will compete at the competition, which runs until January 21 and will see the eventual winners book their place at the London 2012 Olympic Games.

The biggest volleyball event the venue has hosted in the past was a qualification round for the FIVB Volleyball Men’s World Championship 2010 but this is set to eclipse that in both size and importance.

Reigning African champions Egypt and runners-up and hosts Cameroon, Tunisia, Algeria and Ghana will all battle it out for the African Olympic berth.

“We need to have a successful event here in Cameroon for this prestigious occasion of the Olympic Games Qualifications,” Cameroon Volleyball Federation president Louis Timba said ahead of the competition.

“What makes the event more valuable is the participation of all the continental big forces specially the last African Nations Championship final four teams Cameroon, Egypt, Tunisia and Algeria.”

By Mark Lebedew: Coach Or Educator?