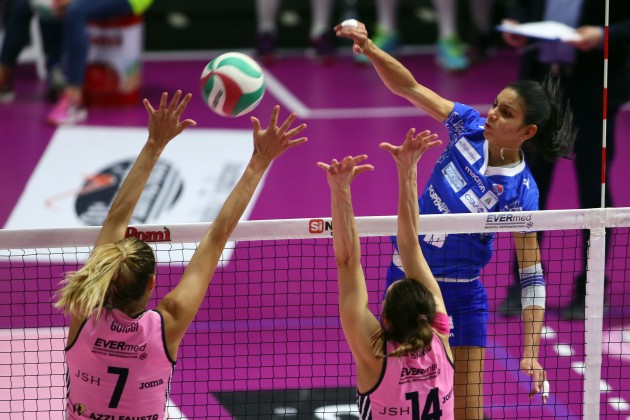 Italian blocker, who set a new record of 11 blocks in a single match in the history of women’s Serie A in the previous season (match that ended in three sets), has renewed contract with Saugella Team Monza. Francesca Devetag will for the fifth consecutive season play for Monza and in the previous season she was the seventh best blocker of the league with 71 blocks and for sure she was one of the main players of the team. She played 28 matches and scored 171 points (check stats).

Venezuelan Roslandy del Valle Acosta Alvarado will play one more season in Bergamo. After a great previous season, which she ended on the 9th place of the best scorers (323), she decided to renewed contract for one more. Check her stats.

This will be the second season in Italy while before that she played in Germany, Switzerland, Finland, Puerto Rico and USA (member of University Arkansas).

“When it was time to decide whether to stay or change a club, there was only one thought in my mind: to stay. I liked everything and everyone in my first year in Bergamo: the staff, the company, the people, the fans and then the city, so warm but quiet. I felt at home. Coming to play in Italy was a dream come true, I was happy to come here. And I was happy to have chosen Bergamo, because I felt loved every day. I had worked hard to get here and I want to continue with that. I chose to stay also because I know we had a difficult season, but I’m sure the next one will be good and we’ll do well. Now the dream is to have a good season, to give the team everything I can and get to be among the top teams of the next championship“.

Ilaria Spirito is a new libero of Pomi Casalmaggiore for the season 2018/2019. She cames from UYBA in which she spent last two season.

“I am very happy to be here. I can not wait to get into the gym and start working. This company needs revenge and I’m ready … to take them too along with the team and the fans “.

After a season in Serie A1 where she played for Il Bisonte, Chiaka Ogbogu moved to Poland and in the next 2018/2019 season, she will play for the champions! She is a new middle blocker of Chemik Police and in that way, she replaced Veljkovic who moved to Novara.

With Il Bisonte Firenze she took the eighth place but she started her career at the University of Texas and until now she is the best blocker of the University since 1999. Ogbogu was a three-time first team All-American, earning the honors in 2014, 2015 and 2017.

After a year of break, Paulina Maj Erdwardt returns to volleyball. She became a new member of BKS Profi Credit Bielsko Biala. Last time this 31-year-old libero played for Grot Budowlani Lodz with whom she reached the vice-championship of Poland.

“I am very pleased that after all these years I come back to the club where I really started a seniors’ volleyball adventure. I am glad that I will defend the colors of the club once again and enjoy my fans, I hope to have good games. I hope that we will create a good team and together with the fans we will play volleyball. It’s my little goal to give fans positive emotions through my game. I love this city and I think that it’s not so far away from my family I would live here. I have many friends here, so all the more I am happy that I will be able to play in Bielsko-Biała again” said the new Bielsko-Biała libero.

AVL-Men DG: The Last decision was made